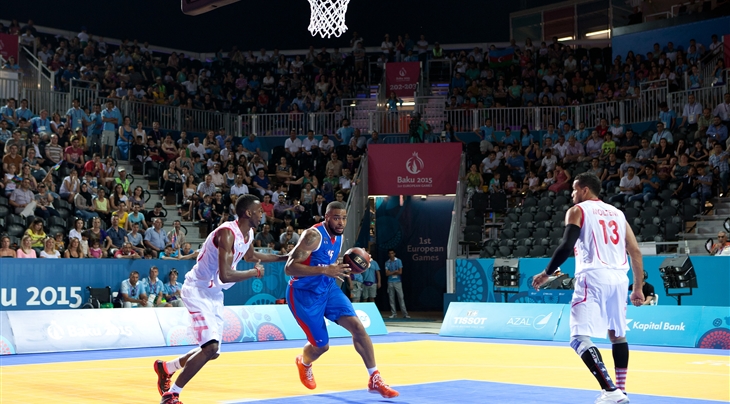 BAKU (2015 European Games) - The 3x3 Basketball Tournament will be one of the highlights of the European Games in Baku from 23 to 26 June. Azerbaijan's men and Ukraine's women were off to a flying start, winning their two games on Day One.

Azerbaijan's men confirmed they would be a force to be reckoned with after beating Czech Republic (17-14) and Switzerland (17-9) in Pool D. Ohran Hacieyeva was the team’s top scorer with 16 points. Moses Marshall was more than a sidekick, adding 11 points, a monster dunk and numerous spectacular blocks to stop the opposition.

Lithuania in Pool A and Greece in Pool C also won their first two games. Slovenia in Pool A, Russia and Spain in Pool B, Serbia in Pool C and Andorra in Pool D only played once on Day 1 and are the only other teams to remain undefeated in Baku.

Ukraine's women were unstoppable on Day One, defeating both Czech Republic (15-11) and Turkey (19-11) in Pool B. Ganna Zarytska led the charge with 16 points, including countless blocks. Olga Maznichenko made her presence known, contributing 13 points and including some crucial long-range shots.

Switzerland in Pool A, Slovenia in Pool C and Lithuania in Pool D also started the competition in style with two wins. Belgium in Pool B, Spain in Pool C and Russia in Pool D only played once on Day 1 and are the only other teams with a clean record in Baku.

Switzerland's Sarah Kershaw and Ukraine's Ganna Zarytska led all scorers on Tuesday with 16 points each. Lithuania's Kristina Alminaite did not disappoint either, scoring 14.

Relive Day One (Part One)