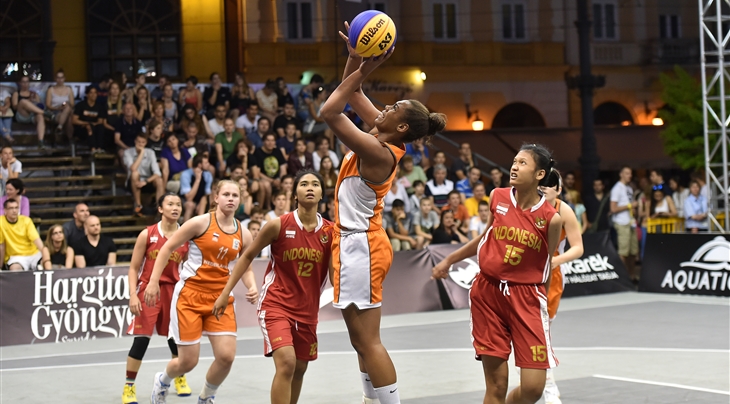 The Netherlands have successfully hosted several big international events over the past two summers including a 3x3 European Championship qualifier at the Olympic Stadium in 2014. This year’s venue has moved to a different location at Hoekenrodeplein and will be played right in front of the famous Ajaks Stadium.

The hosts’ U18 women's team, supported by the home crowd, will try to bounce back from a disappointing performance in Debrecen, Hungary on 4-7 June, where they took part in the FIBA 3x3 U18 World Championships and finished 9th. Prior to that, the squad had an amazing campaign during the 2014 Youth Olympics, where they fell short in the final and ended up with a Silver set of medals.

Led by Janis Ndiba Boonstra, who was on the Netherlands team at both events, the Orange Angels are one of the heavy favourites for a success during the upcoming qualifier.

Among the teams that also participated at the 3x3 U18 World Championships in Hungary are Israel (4th) Poland (15th), Estonia (17th), and Andorra (24th) as well as Wales and Lithuania.

Team Russia, who finished 5th in Debrecen, is the squad to watch in the men’s category. Look out for the lightning-fast point guard Aleksander Yadrischensky to ignite the crowd and for the mobile big man Edvard Sharnin, who poses a serious offensive threat once he touches the ball.

The other teams that will battle out for a trip to Minsk in the men’s category are: Lithuania (6th in Debrecen), Germany (11th), Andorra (18th) as well as Belgium, Czech Republic, Netherlands, Wales, and The Former Yugoslav Republic of Macedonia (MKD).

The event schedule is available here and all games on the Main Court will be livestreamed on youtube.com/FIBA3x3.

Five teams from each category will advance to the 3x3 U18 European Championships in Minsk.

Last, but not least, we’ll have an international Dunk contest in store for the fans to highlight many more side-events. Professional dunkers Porter Maberry and Kristaps Dargais of Dunk Elite will compete against each other and two local athletes. Look out for Porter, who is the world’s shortest (1.68m or 5'5") professional dunker, to have something special in store for the fans.