3x3 in Marshall Islands gets veteran players into shape 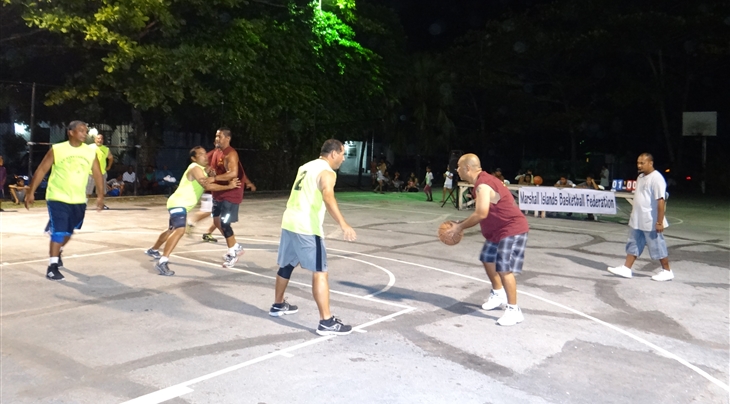 MAJURO, Marshall Islands (3x3) - 3x3 basketball is not only the dunks, ankle-breakers and other spectacular plays of the FIBA 3x3 World Tour. It has also become a unique tool in the fight against sedentarism. Former Marshall Islands Basketball Federation President Giff Johnson (and current editor for the Marshall Islands Journal) leads us through a compelling example in the Pacific islands.

"Screen left!" shouts a player on the court. "Hey, ref, watch the holding!" yells another. Typical player patter at any 3x3 competition. Except this 3x3 isn't your ordinary basketball scene.

It's a 40-and-over 3x3 basketball league in a western Pacific nation that leads the world not only in field goal percentage but in the prevalence of diabetes. In the 10-to-30 age group, the Marshall Islands may lead the world in per capita basketball playing, so popular is the sport that it takes on an almost religious fervour.

But the lack of organised sports activities for the 40-plus age group is one contributor to the Marshall Islands having the world's highest percentage of diabetes - 37 percent of the population of 55,000, according to the International Diabetes Foundation. By contrast, Africa as a region has a diabetes rate of under five percent.

The majority of the more than 60 players who are participating in the Marshall Islands Basketball Federation-sponsored 3x3 leagues and tournaments haven't been playing ball for years.

"At first I thought it would be hilarious given everyone's [lack of] conditioning," player Tony Muller, a senator in the national parliament and an executive board member of the Marshall Islands National Olympic Committee, said of the first veterans 3x3 that was held late last year.

"After the first few games, it became more serious. People were starting to work out more in preparation for the games."

Initially, it was difficult to get the over-40 players to sign up, largely because they were so out of shape and hadn't touched a basketball in years.

"When the first tournament commenced, it was so humbling to see players on the court I hadn't seen since I was a teen," said Marshall Islands Basketball Federation Secretary General Deborah K Shoniber, a member of FIBA's Central Board.

I know we are saving lives. - Shoniber

"My coaches were back on the court, my colleagues, my friends and neighbors.

"Once the tournament started, we had guys calling in, texting and e-mailing about how they could join and register teams for the next one. This is when we knew we finally broke the obstacles and revived Veterans 3x3 basketball."

The basketball federation calls its 3x3 competition the "Say No to Non-Communicable Diseases Veterans 3x3" and has gained sponsorship from the Ministry of Health as part of its programme to combat lifestyle illnesses that are at epidemic levels. The country has gone from a subsistence way of life to urban living and western foods in less than two generations.

"We have been extremely successful at promoting and organising basketball tournaments on the island but we realised we still hadn't captured the older players," Shoniber pointed out.

"Our government declared a state of emergency over non-communicable diseases (NCDs) and the epidemic being on the forefront of the headlines consistently, we wanted to provide some sort of platform to get the most vulnerable people active and doing something that was fun for them at one point of their life. What better way to do that than by bringing back basketball into their lives?"

Following the first 3x3 Say No to NCDs Veterans League late in 2014, the federation organised a double elimination veterans 3x3 tournament to kick off 2015 the second week of January, and in late March began its second 3x3 Veterans League with Ministry of Health sponsorship that is expected to run until late May. The teams play on an outdoor court three nights per week and often draw a significant crowd to cheer the players.

Muller commented on the generation-bridging audience: "The 3x3 Say No to NCDs Veterans League has sparked more interest from our younger folks, who come out by the dozens to cheer old heroes from teams long ago. Great, great role models. It’s great witnessing these young fans cheer on their teams, then afterwards taking over the courts. It’s absolutely healthy for the sport!"

The Pacific Islands - with the Marshall Islands at the top of the list - lead the world in obesity and diabetes, according to the World Health Organization (WHO). It has everything to do with sedentary lifestyle and changes from a diet of fresh fish and produce from the land to store-bought processed foods.

Albeit modest, the basketball federation has found a way to intervene in helping the older generation of mostly "retired" ball players fight against NCDs. The Ministry of Health provides a team of nurses for the opening night of the veterans' leagues to screen players, coaches and fans for high blood pressure, blood sugar, and obesity. Each time the nursing team conducts screening at court side, they identify players who did not know they have hypertension and diabetes.

"With the Ministry of Health as a partner and providing free services right on the court, we've captured a few vulnerable ones and most likely helped them make changes to improve their health. I know we have saved lives, there is no question about that," tells Shoniber.

"From my own observation, more people are starting to take better care of themselves, visiting our hospital and exercising," adds Muller.

"I believe initiatives like the 3x3 are a big, big push to this change in lifestyle."

Every Tuesday, Thursday and Saturday is 3x3 basketball time for the older generation in Majuro. As the current league nears playoff time in mid-May, expect the crowds to get bigger, the complaints to the referees louder, and the action more intense. It’s a battle against non-communicable diseases — and for bragging rights, no small consideration in the world of basketball.