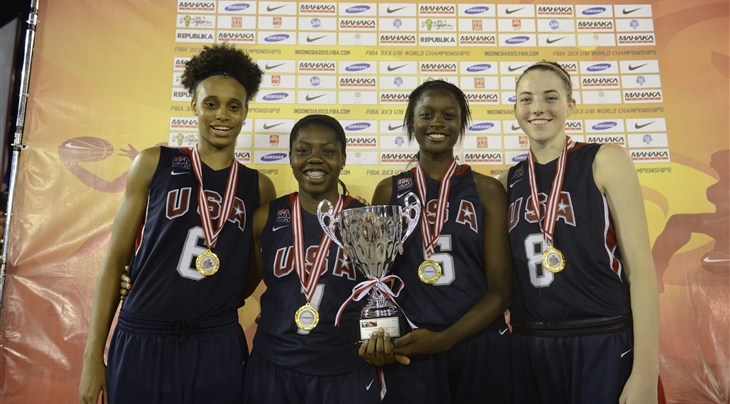 Story
There won't be much debate over who's the favourite in Pool C. The US team has won every world U18 women's event since 2012. Plus the ssssstrong Arike Ogunbowale is back, chasing a historic three-peat after winning gold at the 2013 FIBA 3x3 U18 World Championships and the 2014 Youth Olympic Games (YOG). She won't dribble alone in Debrecen with national team regulars Nathalie Chou and the towering Kristine Anigwe (1.96m), on top of US 3x3 U18 National Trials MVP, Erin Boley.

The others teams in the pool do have a substantial experience on the 3x3 scene, hence Romania, Egypt and Andorra all participated in the YOG. Even better, together with the US team, all were in the same pool in Nanjing, with USA beating all their counterparts, Romania beating both Egypt and Andorra and Egypt beating Andorra.

Two of the YOG players are back for Romania (Ana Ferariu and Beatrice Peter) who are regulars on the 3x3 scene but have yet to make noise at this level (12th at the YOG, 18th in Jakarta, 11th in 2012).

It may be a learning experience for Egypt who will bring an especially young team to Hungary (15 years-old on average).

Andorra has a ton of experience to offer, with 3x3 events being played all year long in the country. Plus Maria Vidal Segalàs is back from her experience playing at the YOG and ready to lead Andorra to the next round.

Italy was not at the YOG but did extremely well in 2013, reaching the semi-finals. The team will be extremely athletic with all four players standing over 1.80m, including the talented Giulia Ciavarella who stood out for Italy at the 2014 FIBA U17 (Basketball) World Championship.

Switzerland will be one of the outsiders in Pool C, with a successful 3x3 programme (the senior women's team finished 6th at the 2014 FIBA 3x3 World Championships) and some exciting players, starting with the spectacular Evita Herminjard.