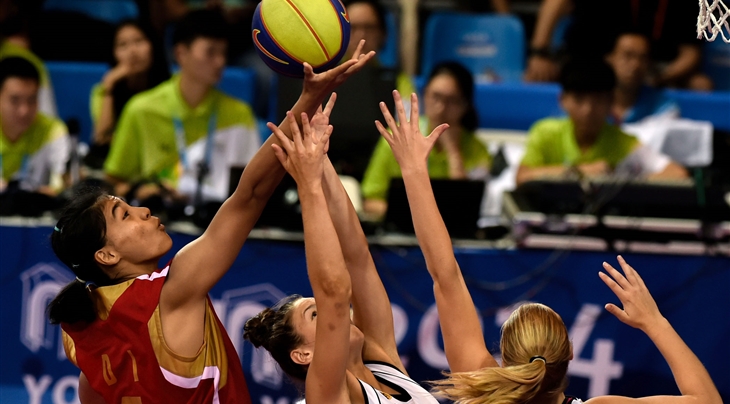 Less than a year ago, Dilixiati Dilana was chosen among all Chinese athletes to be the flag-bearer at the opening ceremony of the Youth Olympic Games (YOG), which were staged in Nanjing, China on 16-28 August. Despite her skills and her 1.93m, China could not get past the quarter-finals but Dilana made such a strong impression that she was already called-up with the senior basketball team. Her team-mate at the YOG Wang Zhen (1.88m) is back too for a Chinese team which will be the tallest team, not just in Pool B but in the whole women's tournament.

Dilana and Zhen will not be anything new to the French squad, whose four players beat China at the 2014 U17 (5on5) World Championships for Women. Lisa Berkani already has Euroleague Women experience, learning the ropes from basketball superstar Céline Dumerc at Tango Bourges Basket. Maeva Djaldi Tabdi will simply try to follow in the footsteps or her sister Clarince who won gold at the mixed event of the 2012 FIBA 3x3 U18 World Championships.

Estonia stunned the world at the 2013 FIBA 3x3 U18 World Championships, winning an unexpected silver medal in Jakarta. The following year at the YOG, they would again do well, finishing in 6th place. None of the silver 2013 medallists are back and only the crafty Kadri Uiga returns from the YOG squad. Enough for another medal run?

Poland is seeded number 2 thanks to an incredible number of 3x3 events in the country and second rank in the 3x3 Federation Ranking but has not participated in any women's U18 event in recent years. The team is very young but features some great prospects, including Klaudia Niedzwiedzka and 15 year-old (!) Anna Makurat.

New Zealand and Guam are back to the competition after a disappointing winless effort in 2013. Krystal Leger-Walker appears like the leader for the Kiwis with her long experience in other youth national teams. Speaking of experience, Kali Benavente knows a thing or two about 3x3, making her third appearance at the FIBA 3x3 U18 World Championships (2011, 2013, 2015), four if you include her participation at the YOG in 2014.