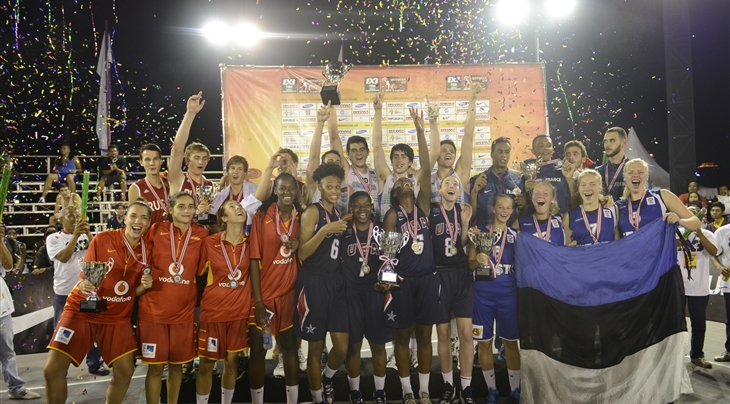 A brand new Argentinian team will have to be ready from Day 1 in Pool D with USA starring NBA star Raymond Felton's nephew, Jalek Felton and looking to win its first-ever 3x3 tournament with a male team. Argentina also could have done without Puerto Rico and Spain, who both reached the quarter-finals of the last edition in Jakarta, Indonesia on 26-29 September 2013. Georgia and Indonesia will complete the eye-popping pool.

The 24 men's and 24 women's teams are divided in four pools of six and seeded based on the FIBA 3x3 Federation Ranking, where national federations are ranked according to the aggregate ranking points tallied by their top 100 nationals in the category.

Every team will play against the other five in its respective pool, with the top four progressing to the last 16 and then playing knock-out games all the way to the final. The one exception is for the losing teams of the semi-final, who will compete for the bronze medals.

On top of the men's and women's team event, there will be more medal opportunities with the three individual contests: the Dunk, Shoot-Out and Skills contests.

Hungary will definitely need home-court support in Debrecen with traditional 3x3 powerhouses Russia and Poland also in Pool A. All eyes will be on the Philippines team though, who announced the return of Kobe Paras, whose success at the 2013 Dunk Contest was viewed by over two million people on YouTube. Add Kazakhstan and Uruguay to a long list of pretenders in this pool.

2013 runners-up France will not have an easy path back to the final either in Pool C with a massive New Zealand team (featuring basketball prodigy Tai Wynyard) and 3x3 specialists from Brazil, Estonia and Turkey on top of first-time participants Vietnam.

Lithuania finished fourth in 2013 but won the 3x3 U18 tournament at the Youth Olympic Games (YOG) last year in Nanjing, China. The team has changed completely and will have to deal with the likes of Romania and Germany (8th and 10th at the YOG respectively) and an ambitious Egypt team, willing to put Africa on the 3x3 map. Andorra and Guatemala will complete Pool B.

In the women's tournament, the USA will look to maintain their supremacy after winning the last two editions and the 3x3 U18 event at the YOG last year. This would mean a historic third straight 3x3 gold medal for the dynamic Arike Ogunbowale. 2013 semi-finalists Italy surely doesn't think that way. Andorra, Egypt, Romania and Switzerland will also feature in Pool C.

The surprise 2013 runner-ups Estonia will be put to the test in Pool B with two 2013 quarter-finalists, China and France. Guam, New Zealand and Poland will only make things harder.

Netherlands impressed at the 2014 YOG, with a near-upset of the USA in the final. They can count on star player Janis Ndiba to make a strong run in Pool D despite two other teams who reached the Top 10 at the YOG, Belgium and the Czech Republic (5th and 10th respectively). And don't overlook Brazil, Indonesia and Turkey.

Last but not least, Pool A will see three teams who finished in the Top 8 at the YOG, starting with hosts Hungary who have brought back three of the girls who finished 4th in Nanjing. The team who deprived them of a bronze medal (Spain) will be there, along with Germany (8th). Israel, Slovakia and Venezuela will make it a real test for Nina Aho & co on their road to home glory.