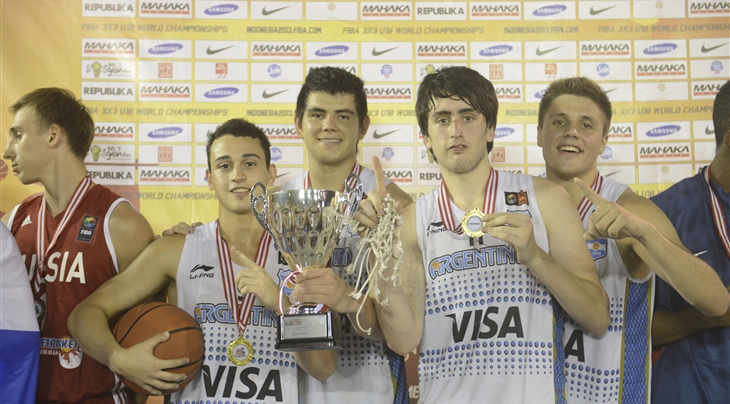 Story
There are no words to describe how dominant Argentina was two years ago when they won the 2013 FIBA 3x3 U18 World Championships: 11 games, 11 wins and the most suffocating defense ever seen in the competition. The team led by the supremely talented Gabriel Deck conceded only six points on average from the quarter-finals to the final. Argentina showed they had a deep pool of talents when a brand new team struck bronze at the 2014 Youth Olympic Games (YOG). Once again this season, the team started from scratch but with a few eye-popping names such as Martin Fernandez, who starred for his country at the 2014 FIBA U17 (Basketball) World Championship.

Argentina had better be dominant again because Pool D has been nicknamed D for Death on the social media with the presence of 3x3 superpowers Puerto Rico, Spain and USA, together with Georgia and Indonesia.

Puerto Rico was impressive in Jakarta as well, winning their first 8 games before losing to France in the quarter-finals. Their YOG experience was not nearly as successful (13th) but the country comes with a new group including the lanky Keythom Cedeno.

The US have been extremely successful in the women's category but are still looking to win their first-ever title in the men's competition. They are likely to dominate the painted area with Zach Collins (tallest player of the tournament at 2.12m) and PJ Washington (2.08m). Payton Pritchard is announced as the fastest player in recent years and Jalek Felton should be a regular in our Top 10 Plays of the Day videos. The nephew of NBA player Raymond Felton has bounce and already announced his participation at the Dunk Contest...

Indonesia have been a regular in 3x3 events after the discipline grew as fast as Payton Pritchard following the organisation of the 2013 FIBA 3x3 U18 World Championships.

Georgia will make their first appearance in a FIBA 3x3 World Championships and rely on a big team, with the shortest player reaching 1.90m and the talented big man Nika Darbaidze.