What if Bucharest's time had come at the FIBA 3x3 World Tour? 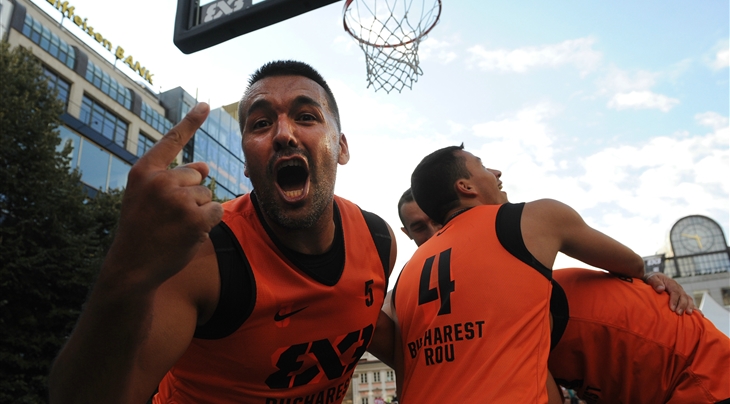 TOKYO/SENDAI (3x3) - Team Bucharest (ROU) is back in the FIBA 3x3 World Tour Final. In fact the tallest team of the event is the only squad which has featured in all three editions of the Final.

After two eliminations in the quarter-finals, the team is stronger than ever and fresh off a title with the exact same team representing Romania at the first-ever 3x3 European Championships. The only issue? The two Slovenian teams (Trbovlje and Kranj) that beat them in the quarter-finals in the last two editions are here and so are their eternal rivals from Novi Sad (SRB) who beat them in back-to-back year in the final of the Prague Masters.

Bucharest did not get an easy seeding in Pool B with two Masters winners, the experienced Sao Paulo team, winner of the Rio de Janeiro Masters and the spectacular Manila West, winner of the Manila Masters. This being said, the number two seed will feature the top scorers of both the Prague Masters (Catalin 'Sarmelo' Vlaicu) and 3x3 European Championships (Bogdan 'Popeye' Popescu).

What if the win in the final of this event against the same team who won the FIBA 3x3 World Tour last season was a sign of things to come?

Bucharest's three main rivals will be spread among the other three pools with the number one seed Novi Sad listed as the heavy favourite in Pool A. Last season, at the FIBA 3x3 World Tour, Dusan Domovic Bulut nearly had to win his ticket to the Istanbul final on his own. However he will count on old partner in crime Marko Savic and 'The Maestro' Dejan Majstorovic in Sendai. Team Denver (USA) and the youngest team of the event, Santos (BRA), complete Pool A.

In Pool C, Kranj (SLO) will battle it out with two Asian teams, Jakarta (INA) and Wukesong (CHN), the latter of which is a team that features Chris Reves, the top scorer on the FIBA 3x3 World Tour this year.

Trbovlje (SLO) sure could have done without World Tour Final contender Saskatoon (CAN) or the local favourites Team Kobe (JPN).

The pool stage starts at 12:20 local time (GMT +9) on Saturday 11 October with a much-awaited clash between Novi Sad (SRB) and Denver (USA) and finishes around 17:00. Fans will not want to miss the Nike Dunk Contest Qualifier at 15:15 since several of the World Tour players have won dunk contests in the past such as Jordan Burger (Santos) and Rey Gueverra (Manila West).

On top of the Samsung Shoot-Out Contest (with its final set for 14:50), fans will also be looking forward to the final of the Nike Dunk Contest at 16:05 featuring Rafal 'Lipek' Lipinski in his quest to become the three-time FIBA 3x3 World Tour dunk champion. Though he is the shortest professional dunker in the world (1,65m), Porter 'What's Gravity?!' Maberry may be the highest mountain to climb to keep his crown.

All the action will be broadcast by several TV channels including Japan's BS12 and livestreamed on 3x3’s official YouTube channel.