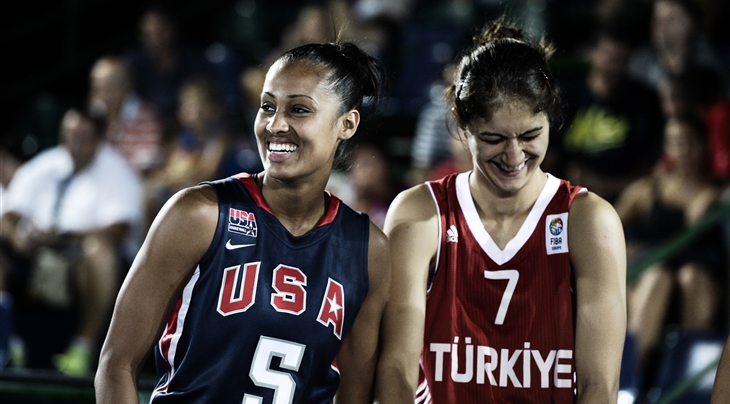 For now however, the 22-year-old is just enjoying the recognition that has come her way after a season of tireless work with Tarsus Belediye witnessed her being thrust her onto the initial candidate list of the hosts.

"When I first heard the news, I was really happy and I felt that my efforts had paid off - it is something that instills a lot of pride," explained Cigil.

"The FIBA World Championship will be in our own country and if I am on the final roster, this will be an altogether different sort of satisfaction."

Last season was certainly bitter-sweet for the small forward. Having spent her entire career with Adana Botas, including six years playing in EuroCup Women since she was just 15 years old, Cigil made the switch to derby rivals Tarsus Belediye.

She played well during her first campaign at her new club, but the team spent most of the season trying to avoid the dreaded drop into the second tier of Turkish basketball.

"If we take a look at it, we really didn't start the season off that well," she admitted.

"But we're happy that we weren't relegated from the TKBL. We fought hard and our club president, Hikmet Avsar stood behind us at all times - he never abandoned us.

"Even though we lost all those matches he always supported us and for that reason, it was a good season and I gained a lot of experience."

After recently penning a deal to move to Mersin Buyuksehir for 2014-15 campaign, Cigil will take her skills into the Turkish camp hoping she can do herself justice and remind everyone why she once represented her nation at successive U20 European Championship Women tournaments.

When she does join up with the senior team, she will at least have the reassurance of seeing a couple of friendly faces in the shape of Esra Ural and Tugce Canitez, who she played alongside for her country at youth level.

"It will definitely be comforting, because Esra and Tugce are players I know," she said in agreement.

"I've also worked with coach Yildizoglu and (national team assistant) coach Erkan Metin before with our trainers at Botas.

"Because of the presence of some familiar faces there, I'll have a distinct advantage of at least being able to feel comfortable."

With little serious pressure or expectation on her shoulders to cement her place compared to many of her fellow candidates, the do-it-all game of Cigil could yet prove to be the kind of X-factor which might fit well as an option off the bench.

Much of her talent has been honed in the 3x3 version of the game, with Cigil playing at the FIBA 3x3 World Championship in Greece two years ago, when she finished with a medal in the Skills Challenge - playing alongside the likes of WNBA superstar Skylar Diggins.

"I think 3x3 is important, because there's something going on there apart from teamwork," claimed Cigil.

"Because it's 3x3, your individual skills need to be better.

"It's not all teamwork, it's ball-handling, shooting skills. You need to move more and put forth even more effort - that's why I think it's a really great thing.

"3x3 is a different style of basketball, not least because you're playing outside, sometimes under the sun and there is a very different atmosphere there.

"I also like it because you play continuously and you have to reach a certain points total.

"You must also defend players with good ball-handling skills and defending them becomes even more difficult.

She added: "Greece was great and enjoyable and especially participating in the skills competition and finishing third. It was a good experience for me."

Now Cigil is looking forward to adding another great experience – going up against her peers in a bid to sneak a surprise place in the final twelve of Coach Yildizoglu.