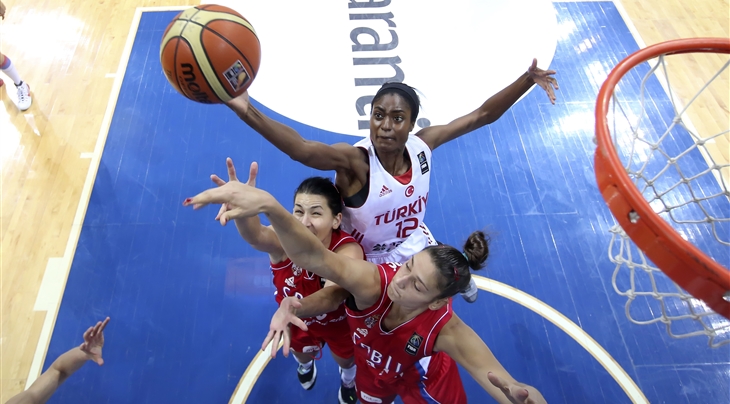 The selection of the Kayseri Kaski forward as Turkey's naturalised player did raise a few eyebrows before the start of the 2014 FIBA World Championship for Women, but she silenced all those wagging tongues on Friday by grabbing 19 rebounds, a dozen of them off the defense glass.

The 28-year-old also led the Turkish offense with 14 points on a night when Nevriye Yilmaz made her first field goal with 5:45 left to play after missing 14 earlier attempts

"I think her (Yilmaz) finding the form made the key difference in the final analysis," Sanders said, shrugging off the limelight.

I did nothing special. I was only holding onto what I was expected to do on the defensive end. - Sanders

Sanders raised the bar for herself on the offensive end saying: "I could have played better in fact. I could have done a lot better offensively."

Playing in front of close to 10,000 fans ranks as the most memorable moment of her career to date.

"This is just like home for me. I have never been on a world stage before. I've never played in a Final Four game of such a big tournament," she said looking ahead to Saturday's Semi-Final against Spain.

"We played them in pre-season (during Turkey's preparations). We are a lot better of a team now. It will all depend on how well we execute our plans," said the native of Nurnberg, Germany.

Serbia's Milica Dabovic was inconsolable in defeat but took time to pay tribute to the fans.

"Playing in front of this crowd was the best experience of my life. Thank you Turkey for that," said the star guard who had a team-high 18 points before fouling out in the final moments of the game.

"I think we didn't deserve to lose. We didn't stay calm when we were leading by more than 10 points. We missed some easy shots when we shouldn't have."

On Saturday, Serbia will face China in the 5-8 Classification Games.