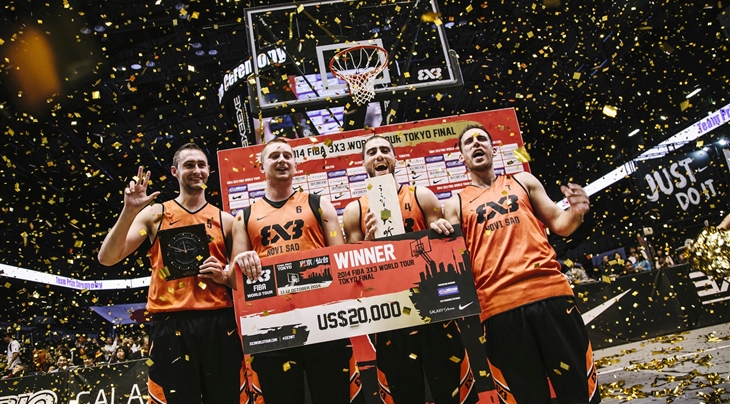 After losing in the Final last year in Istanbul, Novi Sad came back to the FIBA 3x3 World Tour this season with two additions, including sharpshooter Dejan Majstorovic, who topped all scorers at the event and won the Samsung Shoot-Out Contest.

The 26 year-old showcased his shooting touch in the Final, scoring 10 points, including three two-pointers from behind the arc. The number one 3x3 player in the world in FIBA’s 3x3 Individual World Ranking, Dusan Domovic Bulut added six points while Marko Savic and Marko Zdero contributed three and two points respectively.

After scoring eight two-pointers in the opener against Trbovlje (SLO), Willie Murdaugh could not connect from long range in the Final. In fact none of the Saskatoon players scored from downtown against Novi Sad. Murdaugh and Michael Linklater were held to four points and Michael Lieffers and O’Neil Gordon had two and one points respectively.

Saskatoon qualified for the FIBA 3x3 World Tour Final by winning the Chicago Masters while Novi Sad triumphed at the Prague Masters. The 2014 FIBA 3x3 World Tour featured a record six Masters, starting on 19-20 July in Manila and also stopping in Beijing, Lausanne and Rio de Janeiro. The Final saw the winners of a 3x3 event staged in Japan, the winners of the Beijing Masters and the two finalists of the other five Masters (twelve total teams).