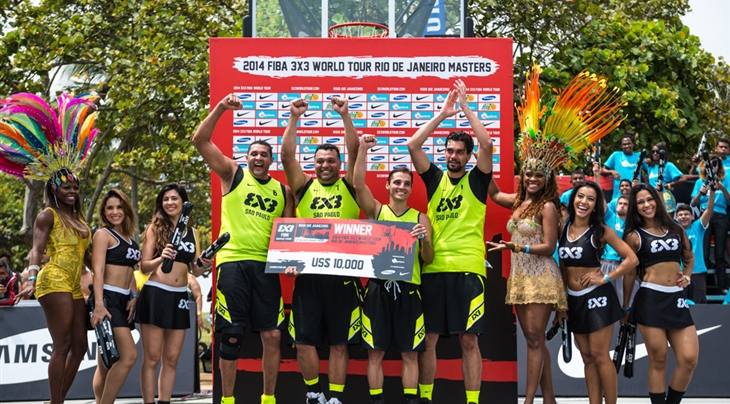 RIO DE JANEIRO, Brazil (FIBA 3x3 World Tour) - Team Sao Paulo beat Santos 21-12 in Sunday's all-Brazilian final of the FIBA 3x3 World Tour Rio de Janeiro Masters, which was held in the park known as Aterro do Flamengo, one of the venues of the 2016 Olympic Games, with the Sugarloaf Mountain on the horizon.

The pin-sized (1.74m) Rodrigo Del'Arco was on fire from behind the arc in the decider, hitting six two-pointers and a total of 14 points, more than the whole Santos team combined.

Less than an hour earlier, Del'Arco had scored a dozen points - including the game-clinching two-pointer - in a thrilling semi-final win against Team Sao Paulo DC that went into overtime.

Thanks to his Sunday heroics, the player also known as 'Diguinho' surpassed Santos' Marcellus Sarmento as the top scorer of the competition with 50 total points.

Sarmento, who had 10 or more points in all three games on Saturday, was held to just four points in the final, with team-mates Jordan Burger and Guilherme Rojas adding five and three respectively.

Team Sao Paulo took home the $10,000 USD winning cheque while Santos won $5,000 USD. Both qualified for the FIBA 3x3 World Tour Final, a first-time ever for a Brazilian team.

All seven players (Santos only featured three) were new faces on the FIBA 3x3 World Tour but not new in the world of 3x3 as Sarmento and Burger won gold representing Brazil at the 2014 3x3 World University Championships in Salvador, Bahia (BRA) on 18-21 September.