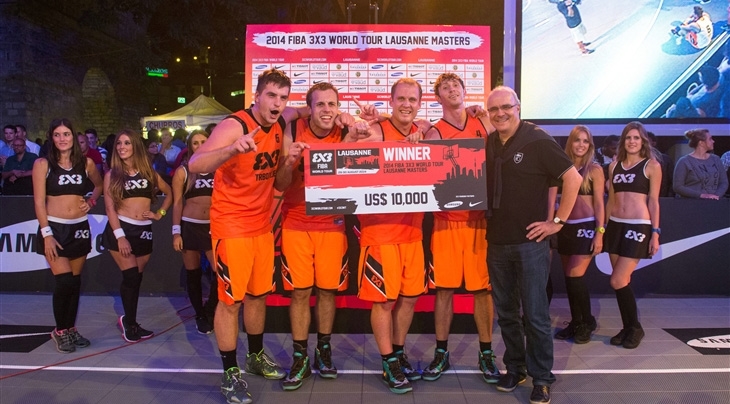 LAUSANNE (3x3) - Team Trbovlje defeated Kranj in a thrilling 17-16 overtime win in Saturday’s all-Slovenian final of the FIBA 3x3 World Tour Lausanne Masters, which was held in the heart of the Olympic capital.

Former number one 3x3 player in the world Simon Finzgar was unstoppable in the deciding game, scoring 10 points, including a game-winning two-pointer in overtime.

The event’s top scorer (36 points overall) Jure Erzen had 7 while sharpshooter Dario Krejic added 6 points in a losing effort for Kranj, who had won the Lausanne Masters in 2013.

The two teams had met several times this season, including in the final of the 3x3 Slovenian Championship on 19 July and in the pool stage of the FIBA 3x3 World Tour Lausanne Masters on Friday (29 August). Both times Kranj had won the game.

The Lausanne Masters also saw the fall of Team Ljubljana (ex-Brezovica) in the quarter-finals, which means the reigning FIBA 3x3 World Tour champions will not defend their title at the FIBA 3x3 World Tour Final in Tokyo, Japan on 11-12 October 2014.

Erzen, Krejic, Mensud Julevic (Kranj), Finzgar and Adin Kavgic (Trbovlje) made history by joining a group of now 18 players who played in all three editions of the World Tour (2012, 2013 and 2014).