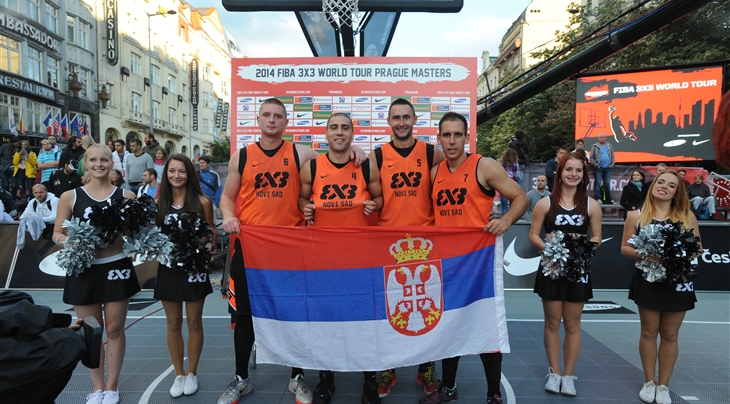 PRAGUE (3x3) -Team Novi Sad (SRB) edged out Bucharest (ROU) in an intense 16-14 win in Sunday’s final of the FIBA 3x3 World Tour Prague Masters, which was staged on Wenceslas Square, in the historic centre of the Czech capital.

The number one 3x3 player in the world Dusan Domovic Bulut had 9 in the final, including two key free throws in the last minute of the game while team-mate Marko Savic added 6.

The final was a rematch of last year’s edition where Novi Sad comfortably beat Bucharest (21-15). This time around, the Romanian team was a threat until the final horn, thanks to new addition Adrian Vasile Stefan’s 6 points and Angel Santana’s 4.

Their team-mate Catalin Vlaicu, who had scored 10 points or more in every game and was top scorer of the event was limited to just 3 points in the final.

In the individual competitions, Justin Darlington wowed the large crowds at the Dunk Contest with his high-flying acrobatics which included a slam preceded by a cartwheel. Santana was automatic from behind the arc to win the Samsung Shoot-Out Contest.

Novi Sad took home the 10,000 USD winning cheque while Bucharest won 5,000 USD. Both qualified for the FIBA 3x3 World Tour Final, which will take place in Tokyo, Japan on 11-12 October.

Santana and Vlaicu, who already made history by joining a group of now 13 players who played in all three editions of the World Tour (2012, 2013 and 2014) became the first-ever players to qualify for all three FIBA 3x3 World Tour Finals.

Team Manila West (PHI), Doha (QAT), Wukesong (CHN), Saskatoon (CAN) and Denver (USA) are the other five teams who have already secured their ticket to the FIBA 3x3 World Tour Final.