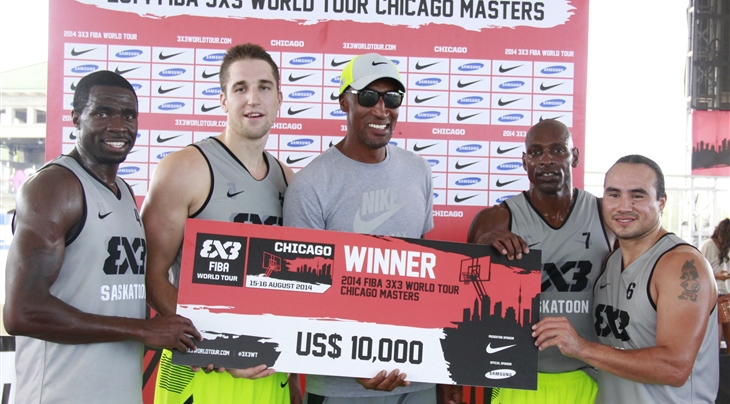 CHICAGO (3x3) - Team Saskatoon (CAN) edged out Denver (USA) in a thrilling 18-17 win in Saturday’s final of the FIBA 3x3 World Tour Chicago Masters, which was held by the beach on the shores of Lake Michigan, as part of Nike’s World Basketball Festival.

Willie Murdaugh had 7 and O’Neil Gordon scored 6 points in the final, including the game-winning acrobatic lay-up with 15 seconds to go in the game.

Team Denver had a chance to tie but Brendan Puckett’s last second jump-shot rattled out. Denver’s pair of sharpshooters Corey Campbell and Derek Griffin led all scorers in Chicago with 31 and 29 points respectively.

Both joined an exclusive group of five players to feature in all three editions (2012, 2013 and 2014) of the FIBA 3x3 World Tour, which also includes Tomoya Ochiai, Keita Suzuki and José Lopez.

In the individual competitions, Team Louisville’s Robbie Smythe became the first FIBA 3x3 World Tour player to beat professionals at the Dunk Contest this season. Team Winnipeg’s Darcy Coss also made history by hitting all 10 of his shots at the Samsung Shoot-Out Qualifier before dominating the competition in the final.

Team Saskatoon took home the 10,000 USD winning cheque, which was handed out by 1992 Olympics gold medal-winner and basketball legend Scottie Pippen, while Denver won 5,000 USD. Both qualified for the FIBA 3x3 World Tour Final, which will take place in Tokyo, Japan on 11-12 October.

Team Manila West (PHI), Doha (QAT) and Wukesong (CHN) are the other three teams who have already secured their ticket to the FIBA 3x3 World Tour Final.