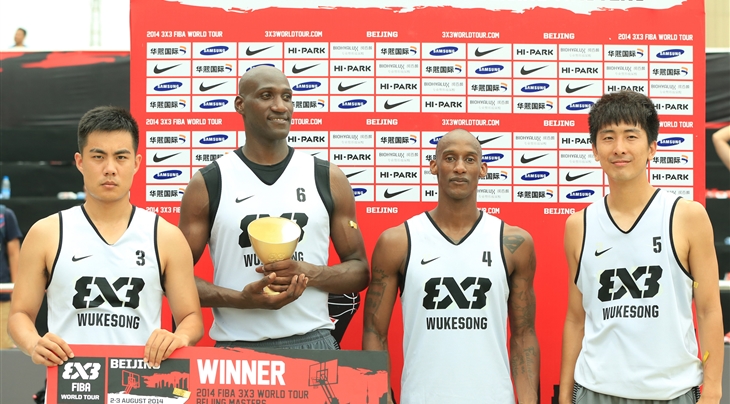 BEIJING, China (FIBA 3x3 World Tour) - Team Wukesong (CHN) dazzled the local crowds with a 21-10 win against Nagoya (JPN) in Sunday's final of the FIBA 3x3 World Tour Beijing Masters, which was staged in the heart of Beijing’s Wukesong Hi-Park, a basketball heaven with its 100 outdoors and indoors baskets.

Chris Reaves was on fire in the final, scoring 14 points including the game-winner from behind the arc. His outstanding performance in the decider helped him soar to the top of the scoring charts in Beijing with 51 total points in five games.

Reaves was one of two US players on Team Wukesong, which also featured two Chinese players. The FIBA 3x3 World Tour sees teams of four players representing a city (here a district of Beijing) regardless of their nationality.

Keita Suzuki - who along with Team Yokohama's Tomoya Ochiai made history by becoming the first players to feature in all three editions (2012, 2013 and 2014) of the FIBA 3x3 World Tour - had six points in the losing effort for Team Nagoya in the final, less than an hour after hitting the game-winner in the semi-final against New Taipei (TPE).

In the individual competitions, Dmitry 'Smoove' Krivenko got the crowds on their feet as he ended the Dunk Contest with his signature jam, a no-look above-the-head pass to himself followed by a between-the-legs slam, while Kim Do Young triumphed at the Samsung Shout-Out Contest.

Team Wukesong took home the $10,000 USD winning prize and qualified for the FIBA 3x3 World Tour Final, which will take place in Tokyo, Japan on 11-12 October.

Team Manila West (PHI) and Doha (QAT) are the other two teams who have already secured their ticket to the FIBA 3x3 World Tour Final.