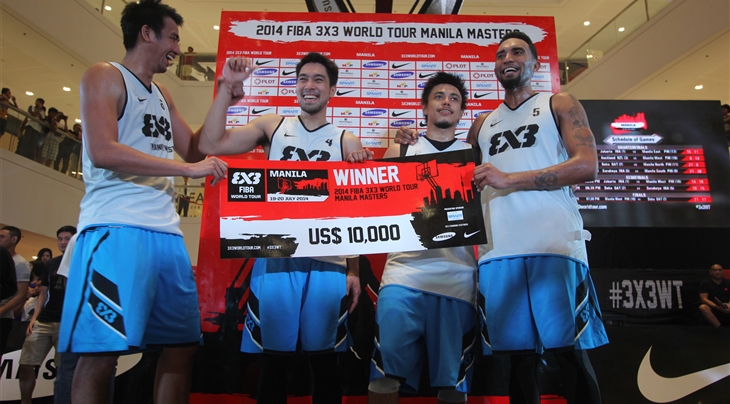 MANILA, Philippines (FIBA 3x3 World Tour) - The 2014 FIBA 3x3 World Tour started in style in the Fashion Hall of the SM Megamall, where Team Manila West (PHI) brought thousands of local fans to their feet with a 21-17 victory against Doha (QAT) to claim the opening Masters of the season.

John Aldrich Ramos was a key contributor in the final, scoring seven points including the game-winning basket from behind the arc. His team-mate, the high-flying Rey Guevarra, also tallied seven points of his own.

After winning all of their games - including a 21-17 success over Manila West in the pool stage on Saturday - Team Doha fell short in the final. Yaseen Musa had eight points in the losing effort.

Musa was one of two players (the other being Mohammed Seleem Abdulla) who had won the FIBA 3x3 World Championships in Moscow, Russia on 5-8 June, representing Qatar.

In the individual competitions, Terrence Bill Ramos won the Samsung Shoot-Out Contest, while Guevarra and Rommel Nino 'KG' Canaleta shined in the SMART Dunk Contest which was dominated by Kristaps Dargais who had a pair of jaw-breaking dunks.

Manila West claimed the USD $10,000 winning prize, while Doha got to take home $5,000. Both teams qualified for the FIBA 3x3 World Tour Final, which will take place in Tokyo, Japan on 11-12 October.