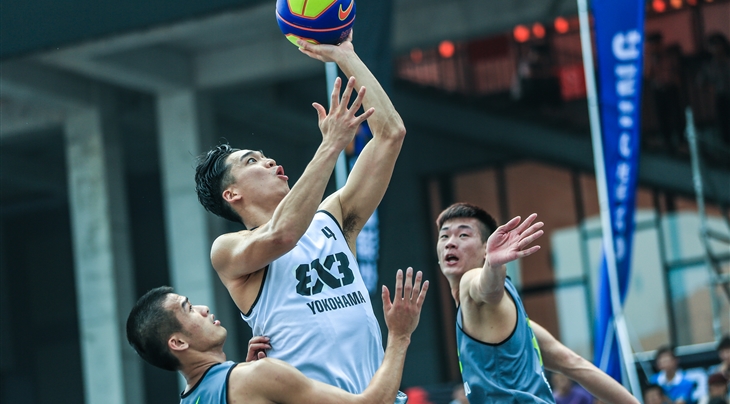 DOHA (FIBA 3x3 All Stars) - FIBA's 2014 3x3 season concludes on Friday with the second FIBA 3x3 All Stars. In the lead-up to the event, we profile the six participating teams. After Novi Sad and Doha, here's a look at Yokohama.

It takes more than facing the two finalists of the 2014 FIBA 3x3 World Championships to discourage Tomoya Ochiai, who is back at the FIBA 3x3 All Stars with a revamped Yokohama team.

"We totally understand that both Novi Sad and Doha are top-level teams," the lefty said.

"But we would like to demonstrate we can win."

Ochiai will become one of only six players to play at both editions of the FIBA 3x3 All Stars. Last year left a bittersweet taste in his mouth as his Nagoya team enjoyed great support from the local Japanese community of Doha but they lost both their pool games, the latter of which in overtime against Doha.

"We learned a lot about the game last year in Doha, playing against skilful, physical and powerful players. This year everyone on the team has a clear role and we successfully organised a well-balanced team and our strength are speed and height."

Yokohama will indeed boast a roster that includes the tallest player of the event, US-born Matthew Kyle aka 'White Ninja' (2.11m). While Kyle already paired with Ochiai at the FIBA 3x3 World Tour Beijing Masters, losing at the buzzer in the semi-finals against the eventual winners, the team will feature two new faces on the international 3x3 level.

The dragster Shota Isshiki will bring a ton of speed while team-mate Kohei Kawakami should also spread the floor with his long-range heroics. The 33-year old scored ten shots from behind the arc… in the same game this season in Japan, in the 3x3 .EXE League.

"If we play aggressively and with heart, it will lead us to victory," the new 'Worm' added, showing enough fearlessness and relentlessness to make his idol proud.