3x3 - YOG Day 7 Recap: The Reign of the Entertainers 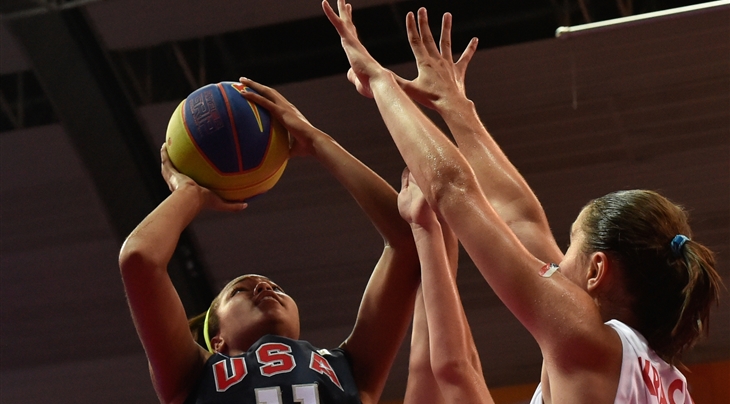 NANJING (3x3) - It was Day 7 in Nanjing at the 2014 Youth Olympic Games’ 3x3 basketball event and the women’s teams played two games each while the men played just once. It was a chance to see again some of the best entertainers in 3x3 basketball.

THE GAME: France-Lithuania (men)
It was up to France to challenge Lithuania’s invincibility in Nanjing.
And once again as it looked like the Greens could not win forever, trailing all game (6-8, 10-13, 14-16), big man Martynas Sajus drove to the basket and scored the basket and the foul to tie the game with less than a minute to play.
With 25 seconds to play, sharpshooter Kristupas Zemaitis scored the dagger, a 2-pointer from the wing over a French defender. Lithuania will start the knock-out rounds on Saturday with a clean 9-0 record.

THE TEAMS: Thailand (women) and Russia (men)
The Thai team is basically the living proof that you needn’t necessarily be tall to play basketball and especially 3x3. The team features the shortest player at the event (Varitta Srijunvong, 1,50m) and the 1,78m Konrawee Phongkwan is meant to guard girls more than 10 centimetres bigger).

Still Thailand continued to shine at the Youth Olympic Games, keeping a clean record on Friday, defeating Belgium (8-7), one of the best teams at the event, just after their landslide over Guam (10-1) and finishing third overall in Pool B.

Russia lost two games early in the competition but since then has truly come together. Even when the talented Vladislav Staratelev takes a day off (2pts shooting 1-8), Vladimir Ivanov shot the lights out (3-4 from long range and 9 total points) and Kirill Gornaev did his usual damage under the basket (7pts) in a tough win against New Zealand (18-16).

THE PLAYERS: Napheesa Collier (USA) and Luis Gonzalez (Puerto Rico)
The return of Katie-Lou Samuelson did not affect the dominating overall performance of Napheesa Collier. The 17 year-old continued to score at a ridiculous rate on Friday, against Guam (10pts at 10-14) and Czech Republic (7pts at 7-9).
We have learned to know Puerto Rican Luis Gonzalez can have his scoring outbursts and he was unstoppable in the demolition of Uruguay (21-13). The 1,83m sharpshooter was the top scorer of the game, nailing 5 two-pointers en route to 12 points.

THE STAT LINE: Ela Micunovic (Slovenia) 13pts on 8-18 (with 5-14 from behind the arc)
The stats themselves may not break your jaw but sharpshooting Micunovic scored every single point from Slovenia’s losse against Netherlands (13-21)

Though we are unbeaten so far, we can be beaten by any team if we don't pay attention and not focused enough. Our target ? A medal, gold hopefully.