3x3 - YOG Day 6 Recap: The Reign of the Entertainers 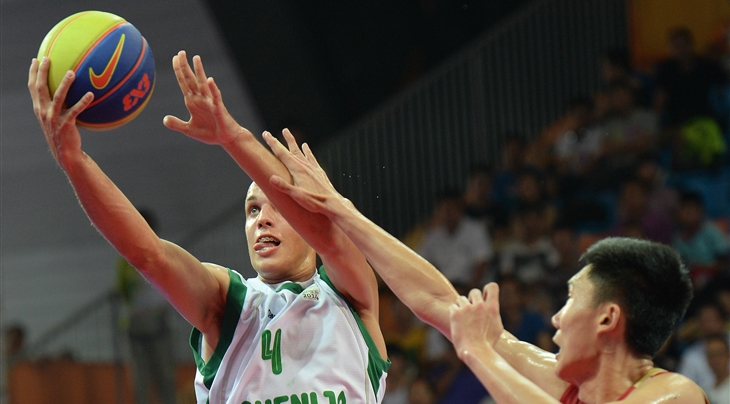 NANJING (3x3) - It was Day 6 in Nanjing at the 2014 Youth Olympic Games’ 3x3 basketball event and the men’s teams played two games each while the women played just once. It was a chance to see again some of the best entertainers in 3x3 basketball.

When we thought Lithuania could finally end their unbeaten run, against a talented team such as Slovenia, they simply stepped up their game and found solutions under the basket with the massive 2,07m big man Martynas Sajus, who scored 11 points. Despite shooting 3-4 from behind the arc, Slovenia's Ziga Lah could not stop Lithuania from finishing another game before the 10 minute mark. The 18 year-old said after the game: "We lost to Lithuania because their defense is too good. They have this this big guy who can rebound. Lithuania is definitely the best team in this competition."

Indonesia has found it hard to compete at the Youth Olympic Games but never had it been such a lecture like against Belgium. Aline Verelst's team-mates recorded an eye-popping 22-1 win and their diminutive leader caught fire once again, netting 6 long-distance shots en route to 13 total points.

Brazil's men started slowly in the competition but they finished Saturday with two more wins in the bag. While the success against Guatemala was expected (19-4, with 11pts from Gabriel Queiroz), the thrilling one-point success against New Zealand (9-8) was a game to remember for the Brazilians.

She led Hungary to an unexpected bronze medal at the 2014 FIBA U17 World Championships for Women (5on5) and now she is dominating in 3x3 basketball. Against Estonia, while the rest of the team shot 1-10, Nagy took over and scored 10 on her own (7-15 including 2 two-pointers).

We could nominate the Dunk Contest silver medallist every day just on the wows he gets from the crowd every time he touches the ball. Ziga Lah tallied 7 points against Lithuania and 5 versus China but if points were proportional to style, he would easily be in double digits.

While the rest of the Puerto Rican team shot 2-14 in the game against the long Germans, Ralat was a man possessed and scored alone more points than the entire German team.

"In my opinion, Netherlands is the strongest team in girl's competition."