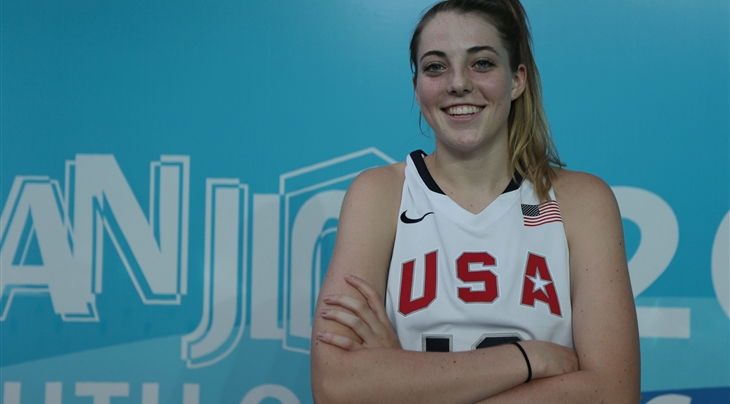 NANJING (3x3) - It was Day 5 in Nanjing at the 2014 Youth Olympic Games’ 3x3 basketball event and the women’s teams played two games each while the men played just once. It was an opportunity to shine for a few teams who had not shined till then like Russia or players who had been sidelined such as Katie-Lou Samuelson (USA).

Two days after losing a thriller against China, les Bleuets come back to the game of the day section, with another narrow loss in the last seconds of the game against Hungary, despite Dunk Contest gold medallist Karim Mouliom scoring eight. Down 19-20, the Hungarian team reverted to Janos Mike, the winner of the 2013 FIBA 3x3 U18 World Championships Free-Throw Poursuit, who hit his fifth and final shot from behind the arc in the closing moments, finishing with 5 out of 6 from long range.

Russia had lost two games by one point already, against Spain and Venezuela but this time there was no way the guys would be defeated again, versus Argentina. Against one of the last undefeated teams at the Youth Olympic Games, the Russians tied the game in the last seconds as Staratelev split his free-throws and prevailed in overtime thanks to Daniil Abramovskii showing there was ice in his veins.

Netherlands have been extremely competitive since the start of the competition and continued to impress against Hungary and Spain on Friday. Shooter Esther Fokke led by example nailing 12 points against Hungary and Janis Nidba was the saviour in a nail-biter against Spain (13-12) with the perfect scoresheet tallying 9 points including a perfect of 5/5 from the field and 3/3 frre thows

After three days of absence, Samuelson made her presence known on Thursday by winning bronze at the Shoot-Out Contest and on Friday with a first game against Belgium, where she scored 9 points on 5/6 shooting with a gorgeous 4/5 from long range in just over 5 minutes. The US are the last undefeated team in the women's event and with the entire team back in full shape, it will be difficult to prevent Samuelson from earning another 3x3 medal after her triumph last year at the 2013 FIBA 3x3 U18 World Championships in Jakarta on 26-29 September.

Janos 'Iron' Mike can shoot the basket ball and he proved it again versus France. His fast release and tendency to swish the nets make it hard to believe that he is "not even the best shooter on that team" as he pretended to us in the mixed zone.

Forget about Esther Fokke (Netherlands' women) and Kristof Horvath (Hungary's men)'s top performance of the event as the 18 year-old Roger Llitera Riera absolutely took care of business against Andorra on Friday scoring 17pts (with 8/8 from the charity stripe) in a rare win for Andorra, against Guatemala (21-10).

"We are eying the gold medal and we think Lithuania will be our biggest opponent."