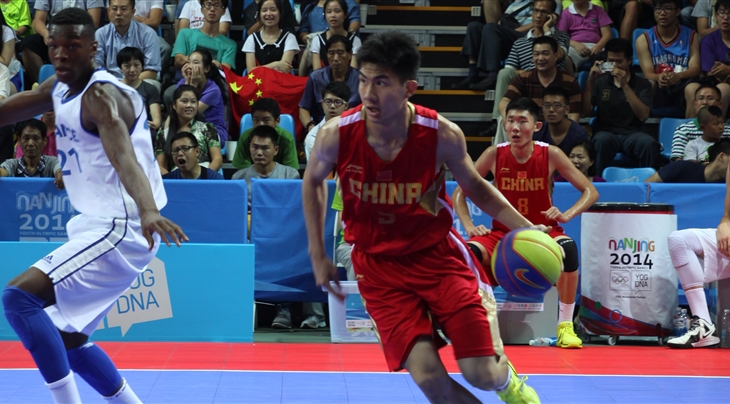 NANJING (3x3) - It was Day 3 in Nanjing at the 2014 Youth Olympic Games’ 3x3 basketball event and the men’s teams played two games each while the women played just once. Chinese fans once again were brought to their feet while more teams like Belgium and US women or Lithuania's men kept their undefeated run alive.

After China's women won a nail-biter on Tuesday against Slovenia, it was up to the men's national team to wow the crowd as a tight game versus France went to overtime. After 'Les Bleuets' scored the first basket, Lei Fu took his responsibilities and made his 4th basket from behind the arc to win the game. Go to www.olympic.tv and search '3x3' to watch the full game.

Even when we thought Lithuania's winning streak would stop at 4 against Germany, Kristupas Zemaitis caught fire from long range hitting 5 two-pointers in 7 attempts and finishing the game with 11 points, just 1 shy of his tournament-best set in the opening against Puerto Rico (12pts). The Greens showed the same chemistry and inside-out game, which they polished already last year when they upset USA and finished fourth at the 2013 FIBA 3x3 U18 World Championships in Jakarta, Indonesia on 26-29 September.

Two months ago, Belgium already showed their new 3x3 ambitions, calling up basketball legend Ann Wauters and striking bronze at the 2014 FIBA 3x3 World Championships in Moscow, Russia on 5-8 June. Their youth team seems poised for similar success after winning their fourth straight game on Wednesday (16-6 against Czech Republic) with another dazzling performance (10pts) from the diminutive Aline Verelst (1,71m).

The 1,98m slasher Lei Fu continued to be the best offensive threat for China in Nanjing, scoring 12 points against a defensive-minded French team, including that lethal two-pointer to win the game and have the entire arena rejoice.

With superstar Katie-Lou Samuelson down with an injury, her future team-mate at the University of Connecticut, Napheesa Collier took over. And by took over, we mean breaking ankles and being the top scorer of the tournament by a mile. The Missouri native tallied more than 10 points... in each one of her 4 games, with a tournament-high on Wednesday against Thailand (13pts).

Surely the 1,85m Dutch star was heating up for Thursday's Women's Shoot-out Contest against Syria as she tied an overall competition-best 15 points, including SEVEN shots from behind the arc.

"Though we had never trained for an overtime situation, we are good from the outside.  3x3 is just so fast and physically demanding. It became even more difficult in overtime.  It has been challenging my limit, but fan support is extremely important for us to fight until the last second. Today fans are just fantastic. I am so happy."