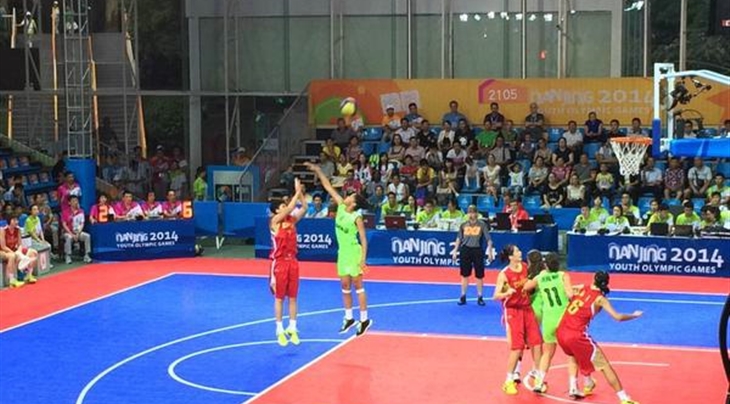 NANJING (3x3) - It was Day 2 in Nanjing at the 2014 Youth Olympic Games’ 3x3 basketball event and the women’s teams played two games each while the men played just once. Chinese fans had reasons to celebrate and so did birthday-boy Adnan Omeragic.

No doubt that this was the game of the day for the local fans as the Chinese women’s national team achieved an improbable come-back against Slovenia. Down 18-12 with 2’30 to go, they started an 8-0 nothing rally to the delight of the spectators. Zhen Wang had 8 points in the game while the Chinese flag bearer Dilixiati Dilana – whom we talked to on Monday – contributed 5. Go to www.olympic.tv and search '3x3' to watch the full game.

Only 3 women’s teams remain undefeated after two days of competition: USA, Belgium and Hungary. This already looks like the continuation of a historic summer for Hungarian women’s basketball following the national team’s third place at the 2014 FIBA U17 World Championships for women. Two of the players in Nanjing were on that campaign: the strong Dorottya Nagy and the unselfish Nina Aho. For those who thought their success against Slovenia was a fluke on Monday, they replied with very convincing wins against Spain (16-11) and Germany (17-7).

Adnan Omeragic (Spain) brought the crowds to their feet on Tuesday against Russia as he dropped his defender on a crossover then exploded to the basket dunking on the help defender with the foul. A special way to celebrate his birthday. The FC Barcelona youth academy product who also possesses a Bosnian passport can do it all. 8 of his 11 points against Andorra on Monday came from behind the arc. Omeragic signed up for the Dunk Contest on Thursday and he got us salivated already.

Ela Micunovic (Slovenia) deserved full mention today after scoring another 11 points in a losing effort against China. No wonder the long-haired ball-handler feels so comfortable playing 3x3, she starred at the 2014 ISF 3x3 Basketball World Championship in Beijing on 23-25 May. She led Slovenia to fourth place, losing in the semi-final… against China.

The 17 year-old caught fire on Tuesday, outscoring Uruguay on his own (15-12). His 15 points mark the best individual performance of the event so far.

"I like 3x3 a lot because with 2 fewer players, there is a lot of space for me. I think 3x3 is more difficult, because there is no break, and it is hard to keep on playing hard through the entire match, especially when your fourth player is injured like us. We have to play full games all the time!"