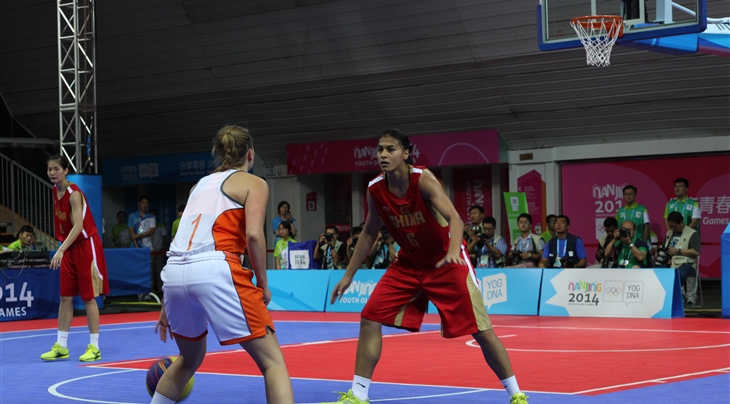 NANJING (3x3) - The 2014 Youth Olympic Games’ 3x3 basketball event started on Monday 18 August with the men’s teams playing two games each while the women played just once. But it was enough for the tallest player of the women’s tournament, Dilixiati Dilana, to make an impression.

THE GAME: Hungary – Slovenia (men)
There could not have been a better way to start the competition. The very first game between Hungary and Slovenia turned out to be a thriller with both teams exchanging long 2-pointers and getting a chance to win. Despite 13pts from Janos Mike (the best offensive performance of the day), Slovenia would win this exciting match that last less than 8 minutes on a gorgeous spin move from the athletic Ziga Lah aka ‘Too Easy’. Go to www.olympic.tv and search '3x3' to watch the full game.

THE TEAMS: Slovenia (men) & China (women)
Slovenia went on to win a second consecutive game, against France, displaying the same versatility of long range bombs and drives to the basket. Though Lah impressed and is likely to be a serious medal contender at the Dunk Contest on Thursday, it is the 1.90m tall Aljaz Slutej who was the top scorer for the Slovenians with 15pts.

China’s women proved against Netherlands their title ambitions. Their defense was suffocating and limited the Orange women to just 5 points. With her 192 centimetres and long arms, Dilixiati Dilana was like the Great Wall of China. The 17 year-old, who was the flagbearer for her country at the opening ceremony also showed some moves on the offensive end, netting 6 points.

THE PLAYERS: Luis Gonzalez Parrilla & Antonio Ralat (Puerto Rico) and Kadri-Ann Lass (Estonia)
The Puerto Rican pair one-two punch of Luis Gonzalez Parrilla and Antonio Ralat could not stop Lithuania but they bounced back admirably against the Polish giants (4 players between 1.97 and 2.09m). Plus they both starred in a very cool video sporting Google Glasses for the IOC Young Reporters.

Ela Micunovic (Slovenia) did manage the improbable achievement of scoring all 12 points from her team against Hungary but difficult to ignore the number one U18 women in the 3x3 Individual World Ranking, Kadri-Ann Lass who scored 9 points leading Estonia to a total route of Brazil (15-2).

THE STAT LINE: Ani Calvo Diaz (Spain) 10 pts – 6/6 FG & 3/3 FT
The Murcia native had the perfect game against Syria scoring 10 points without a single miss from under the basket, the free-throw line or even behind the arc.

THE QUOTE: Dilixiati Dilana (China)
"I felt excited and very honoured to represent China at the opening ceremony. I was a little nervous as well. I think I was selected because I am so tall and people think that I am always smiling and upbeat. In reality I also cry a lot but don’t share this with the others!"