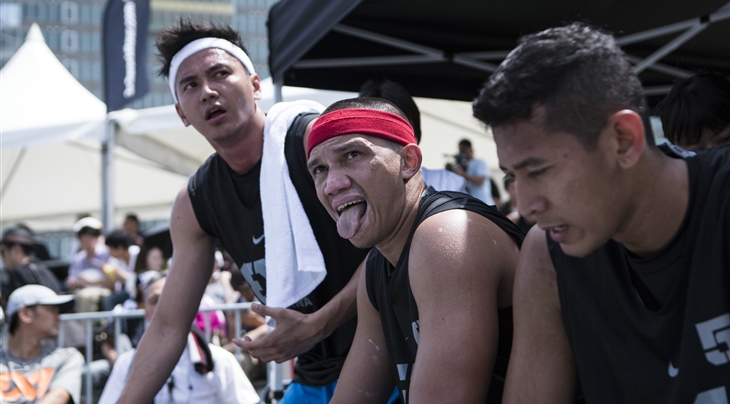 Almost exactly one year later, the same team is back but the tables have turned. Wijaya Saputra & Co arrive in Manila, Philippines as the number one seed, with a long list of pretenders salivating at their crown. Can Jakarta do it again at the 2014 FIBA 3x3 World Tour Manila Masters?

There probably couldn't be a more fitting venue for them than the Fashion Hall of the SM Megamall, one of the biggest malls in the Philippines and in the world, that can hold more than four million people. After all, Saputra won several Bachelor of the Year awards from Indonesian women's magazine Cleo in the past, before he was dethroned by team-mate Rizky Effendi last year. It's hard not to mention Vinton Nollan's forearms as well, tattooed with the logo of last year's Tokyo Masters.

Calvin Abueva, aka 'The Beast', has even more tattoos and an impressive resume here in the Philippines that includes a PBA (the top flight basketball league in the Philippines) Rookie of the Year award in 2013. He will lead Manila North, one of two Filipino teams consisting of professional players.

The other one, Manila West, will bring more flashes than a catwalk with dribbling wizard Terrence Bill Romeo and the high-flying Rey 'Don't call me Che' Guevarra and 'KG' Canaleta and his 40,000 fans on Twitter.

But the bigger test could come from another foreign team, coming all the way from Doha, Qatar.

Just last month, Mohammed Seleem Abdulla, aka 'Big Mo', and Yaseen Musa stole the headlines by leading Qatar to a historic win at the 2014 FIBA 3x3 World Championships in Moscow, Russia on 5-8 June.

Even with the unstoppable Boney Watson and the dominant Erfan Ali Saeed missing, Team Doha will be the tallest and most experienced team at the event and count among the biggest hurdles on a repeat attempt for Team Jakarta.

Between the games, the Manila Masters DJ and a troop of street dancers and acrobatic cheerleaders will entertain the crowd and 3x3 fans should probably be in front of their TV or computer at 17.45 local time (09:45 GMT/11:45 CET) for the Samsung Shoot-Out Contest Final and at 19:00 local time (11:00 GMT/13:00 CET) for the much-anticipated SMART Dunk Contest Final featuring the freakishly athletic Kristaps Dargais and his brand new 360 dunk behind the back...

Click here to find out all the latest scores and news from the Manila Masters.