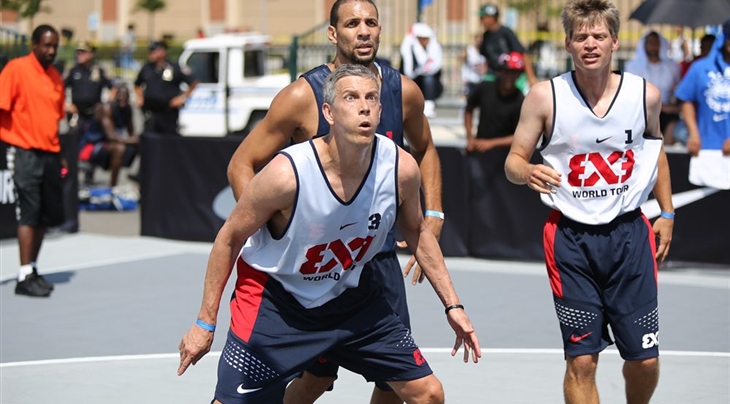 Two years ago, in the inaugural edition of the FIBA 3x3 World Tour, Duncan had a good run leading his team to the quarter-finals of the New York Masters. How can the MVP of the 2014 Sprint NBA All-Star Celebrity Game make the next step? By teaming up with three players averaging 31 years of age that helped him win the USA Basketball 3x3 National Championship on 11 May 2014.

Sharpshooter Craig Moore and slasher Jitim Young made it to the next level representing the USA at the 2014 FIBA 3x3 World Championships where they reached the Last 16 Round where they suffered a narrow defeat against Serbia who featured Dusan Domovic Bulut, quite simply the number one 3x3 player in the world.

Duncan's team, known as 'Team Chi-town', will have a couple of hurdles to clear before thinking of a home-ground success. In Pool C, they will face Toronto (CAN) and an experienced Team Philadelphia that not only impressed on the World Tour last year by reaching the semi-finals of the San Juan Masters, but also beat Team Chi-town just a week ago at the Puerto Rico Streetball World Challenge.

Philadelphia ended up winning the event, edging out another team featured in Chicago, the number one seed Team NY Staten. In Chicago, Zaire Taylor's team-mates will defend their title won last year at the San Juan Masters. Taylor, a poster dunk waiting to happen, is the number one 3x3 player in the US.

The Chicago Masters will bring together the 12 best 3x3 teams in North America coming from four different countries: the USA, Mexico but also Canada and Puerto Rico.

The speedy ball-handler Michael Linklater is back to put the small city of Saskatoon, Canada on the map following their second place at the San Juan Masters.

Speaking of the Puerto Rican capital, Team San Juan’s José Lopez will enter the FIBA 3x3 World history books by joining the exclusive group of men who have played in all 3 editions (2012, 2013, 2014) which includes Tomoya Ochiai, Keita Suzuki but also two other players present in Chicago, Team Denver's Derek Griffin and Corey Campbell. Lopez was the original winner of the FIBA 3x3 World Tour in Miami in 2012.

The FIBA 3x3 World Tour Masters will be staged on 63th South Beach inside Nike's World Basketball Festival and even if Team Chi-town or the other local Chicago Team do not prevail at home, several other Chicagoans are expected to meet success at the event, with Scottie Pippen expected to host a clinic and the rapper Common headlining a series of concert held just outside the 3x3 venue.

All the action will be livestreamed on 3x3’s official YouTube channel.