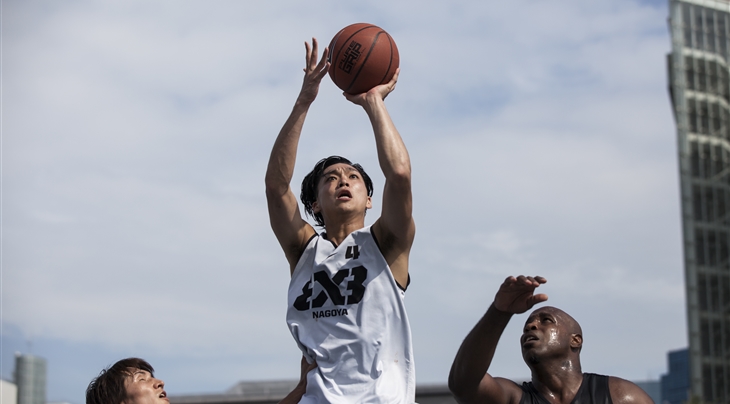 BEIJING (3x3) - With a core team that reached the FIBA 3x3 World Tour Istanbul Final last year, Team Yokohama (JPN) has been seeded number one at the 2014 FIBA 3x3 World Tour Beijing Masters, which will take place on Saturday-Sunday 2-3 August. It will be the second time they face Team Guangzhou (CHN) at the World Tour.

Tomoya Ochiai is writing the World Tour history books: together with Team Nagoya's (JPN) Keita Suzuki, the number 30 ranked 3x3 player in the world will become the first to feature in all three editions of the FIBA 3x3 World Tour.

Last year, he led his team (then called Team Nagoya) to second place at the FIBA 3x3 World Tour Tokyo Masters and thus qualified for the FIBA 3x3 World Tour Final, where they finished eighth. Two years ago, at the Vladivostok Masters, with a completely different team, he started the event with a nail-biting one-point win against Team Guangzhou. Three of the Guangzhou players are back to represent their city in Beijing this year and will join Yokohama in Pool A. Yongin, the best 3x3 team in Korea, will complete a difficult pool.

The seeding is conducted automatically according to the 3x3 individual world ranking (of the three best players from each team). According to the regulations, the number one seed meets the number eight and number nine seeds in Pool A.

The other Korean squad, Team Seoul, will have a tough time in Pool B with Beirut (LIB) and Vladivostok (RUS), two regulars at the World Tour but who will both feature a lot of new faces. Only big man Alaa El Din Arnaout is back from a Beirut team that reached the quarter-finals of last season's FIBA 3x3 World Tour Tokyo Masters.

The local Chinese fans will follow Pools C and D with special interest as they both have two Chinese teams.

Team Wukesong (CHN) should be exciting to watch in Pool C with former NBA player Lee Benson, while Team Beijing BSU (CHN) will introduce some of the rising basketball stars from the Beijing Sports University. Team Nagoya (JPN) will count among the favourites with two players (Suzuki and Nomoto Takeshi).

Pool D will consist of Team Xi'An (CHN), who won a 3x3 event organised by the National Federation of China, Team Changping (CHN) and Team New Taipei (TPE), the winners of the Chinese Taipei Quest.

Pool games will start at 14:00 local time (06:00 GMT/08:00 CET) on Saturday with the revenge between Yokohama and Guangzhou. The top-two placed teams from each pool advance to a standard knock-out round which starts at the quarter-finals stage, from 11:20 local time (03:20 GMT/05.20 CET) on Sunday.

Go to http://www.3x3worldtour.com for full coverage of the Beijing Masters.