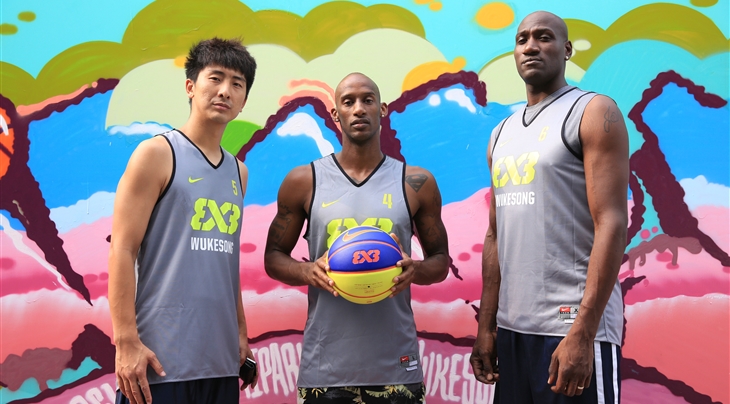 BEIJING (3x3) - With two professional US stars and two talented Chinese players, Team Wukesong (CHN) will be one of the local favourites this weekend (Saturday 2-Sunday 3 August) for the FIBA 3x3 World Tour Beijing Masters. But can they compensate their lack of experience against some of 3x3’s biggest stars?

The massive Lee Benson (2.11m) spoke about the challenge to get used to a brand new exciting game:

"The rules are so different in 3x3: if you get beat, you get beat. No one is there to cover your back. It is also a lot more physical."

His team-mate Chris Reaves, who played the last three seasons in China, explained that when it clicked, things started to look good: "After a few airballs, my shots started to fall through. I think we can generate some spectacular performances.

"But we will be the underdogs this weekend," he added.

Interestingly, 'Underdogs' is also the name of the crew of streetball players and artists from which three members of number 1 seed Team Yokohama (JPN) are from. The squad finished second at the Tokyo Masters before reaching the FIBA 3x3 World Tour Final in Istanbul, Turkey last October.

They will lead a horde of seven international teams (two each from Japan and Korea and one each from Chinese Taipei, Lebanon and Russia) challenging five Chinese teams on their home ground.

Team Yokohama will not be the only squad with World Tour experience as Team Guangzhou (CHN) will feature three former World Tour players, while Team Nagoya (JPN) will have two, including Keita Suzuki who - together with Yokohama's Tomoya Ochiai - will become the first player to feature in all three FIBA 3x3 World Tour editions.

Alaa el din Arnaout also comes back to 3x3's biggest stage after a quarter-final performance last year in Tokyo and his Team Beirut will be one of the teams to watch, along with a new rejuvenated Team Vladivostok who won the FIBA 3x3 World Tour Vladivostok Masters back in 2012.

Speaking of World Tour alumni, local fans are already counting the hours to the final of the Dunk Contest at 15:05 local time (07:05 GMT/09:05 CET) on Sunday, which will feature Dmitry 'Smoove' Krivenko, who stunned the crowd at the FIBA 3x3 World Tour Lausanne Masters last season.

Why should Chinese fans come to Wukesong Hi-Park this weekend, we asked Benson?

"3x3 is a unique atmosphere. You will love to hear the music and it is a show for the whole family. My wife and my 7-month old daughter came to see me last weekend and they loved it."