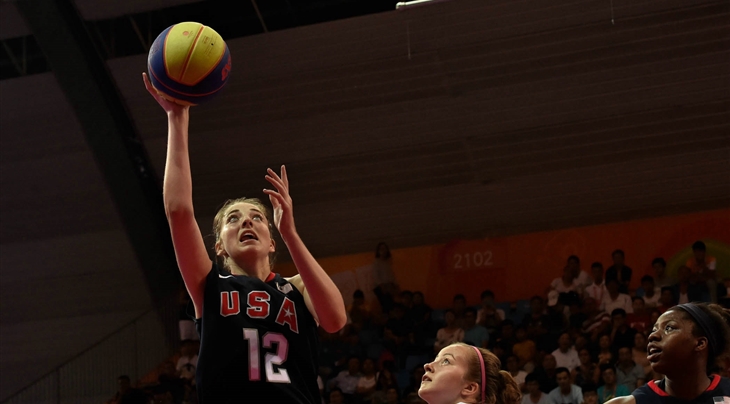 NANJING (3x3) -After 9 days of competition and 11 games, the US women’s national team and the Lithuanian men’s team still have not lost a single game at the 2014 Youth Olympic Games, staged in Nanjing on 18-26 August.

The most points they have conceded is a mere 12. The stat speaks volume about the US domination in China. Arike Ogunbowale and Katie-Lou Samuelson appear to be ready for another 3x3 trophy, next to their silverware of the 2013 FIBA 3x3 U18 World Championships in Jakarta, Indonesia. This would further reinforce USA Basketball’s hegemony on women’s 3x3 basketball, after four straight successes at the World Championships (senior or U18) since 2012.

On Monday the team started things quickly with a 21-7 rout of Venezuela in just six minutes, with 11 points from Napheesa Collier. The quarter-finals were in fact a rematch of the final of the 2013 FIBA 3x3 U18 World Championships and Estonia gave the US their biggest challenge so far (21-12).

In the semis, USA will play Hungary, a team featuring two players who shocked the basketball world by winning a bronze medal at the FIBA (5on5) U17 World Championships.

Dorottya Nagy was the top scorer for the Hungarians in both games today, as they narrowly edged out Egypt (20-18) and won more comfortably against Germany (20-13).

The winners of this semi-final will face the winners of the game between Spain and Netherlands. The Spaniards beat Romania before upsetting Belgium (16-14) in a thrilling overtime while Netherlands destroyed Guam (17-1) and easily defeated China (21-13). The two teams played each other in the pool stage and it was a thriller, which the Orange won by just one point (13-12).

Coincidentally Nanjing will look a lot like Jakarta for the men, as the four semi-finalists of last year’s FIBA 3x3 U18 World Championships are back in the Final Four this season.

It starts with the rematch of the Jakarta final between France and Argentina. The South Americans won in September last year but none of the eight protagonists are back. Argentina has been superb in the pool stage, only losing one game in overtime against Russia. On Monday, they prevailed against two fellow South American teams: Uruguay (20-13) and Venezuela (21-13) with the supremely-talented José Vildoza scoring 20pts combined in those two.

After finishing 6th in Pool A, France completely redeemed itself with two masterpiece victories against Spain (18-10) and Romania (19-11).

The other semi-final will be a rematch of Jakarta’s bronze medal game, which Russia won. While the lone Vladislav Staratelev is back from last year with Russia, Lithuania bolsters the exact same roster.

The number one U18 3x3 player in the world Justas Vazalis had remained quiet until then for Lithuania but on Monday he caught fire and scored 11 two-pointers in 2 games. He had 11 points in the Last 16 Round against Tunisia (22-11) and then 13 of the 16 points of his team in a tough match against Poland (16-14).

Several personalities will be attending the event on Tuesday with IOC President Thomas Bach and 2014 Youth Olympic Games Ambassador Yao Ming back for a second day.

On Monday the former NBA All-Star addressed a crowd of athletes (3x3 basketball players or not), agreed to millions of selfies and he even nailed his first mid-range shot with the 3x3 official ball.

Go to www.olympic.tv and search '3x3' to watch the full games.