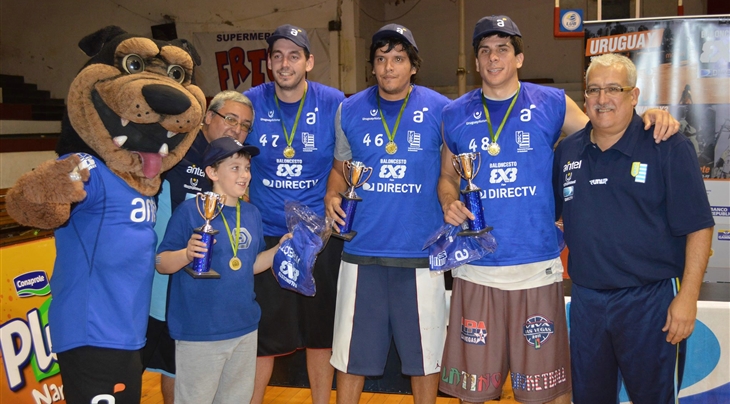 MONTEVIDEO (3x3) - Putting an end to a national quest which started back in October last year and featured 28 (!) events, Team Montevideo also known as 'Jerónimos' took home the "Copa DirecTV" 2013-14 Uruguay 3x3 National Tour on 26 April 2014. Demian Alvarez, Omar Galeano and Nicolas Oliveira therefore won a trip to the FIBA 3x3 World Tour Rio Masters, on 27-28 September. Good news Uruguayan ballers, these three may be looking for a fourth player to strengthen their team for the World Tour.

"Last year we went all the way to the final but we couldn't win", Alvarez explained.

"So, this year I played like the game was my revenge".

Alvarez did play like a man possessed, earning the MVP trophy and leaving even his own teammates impressed.

"He's very good one-on-one, he plays with intensity. He is powerful but also very smart."

Two-time World Tour participant Emiliano Giano - who lost in the semi-finals - was also full of praise for the 30-year-old, who happens to be the second best Uruguayan scorer in the Uruguayan (5x5) LUB: "He is a very good swingman who attacks the basket strong and defends very well."

In fact the 10 points Alvarez's squad conceded in the final were the most they conceded all tournament. During that ultimate game, the two Modernell Brothers, who may have named their team 'Los Galacticos' for their striking resemblance with Cristiano Ronaldo stood strong but Giano explains they had no answer for Galeano.

"He is a strong and heavy big man and I think he made the difference for them."

The rugged Galeano is no stranger in the country, having played against Kobe Bryant and LeBron James at the 2007 FIBA Americas Championship with Uruguay. Relatively new to 3x3, the 32 year-old is ready to make his name for himself in 3x3.

"This 3x3 competition is a new experience for me and I think it could become very important in the future.

"I love the speed of the game, the pace. There's not much time and only one hoop, the space is limited. All those things make 3x3 amazing!"

Alvarez is now looking forward to Rio where he will bring a team that has "height, can rebound and play around the rim". With just Galeano and Oliveira, Team Montevideo is entitled to add one more player (from South America, with at least two FIBA-endorsed 3x3 events in the last 12 months) but the versatile 1.92m player joked:

"We’re three good friends and none of us would like to sit on the bench so we may stick to just three! But in reality we know it would be helpful and we are looking for a player who can rebound but above all is a good shooter."

Uruguayan ballers know what to do now: send their 3x3 mixtapes to @DemianAlvarez41.