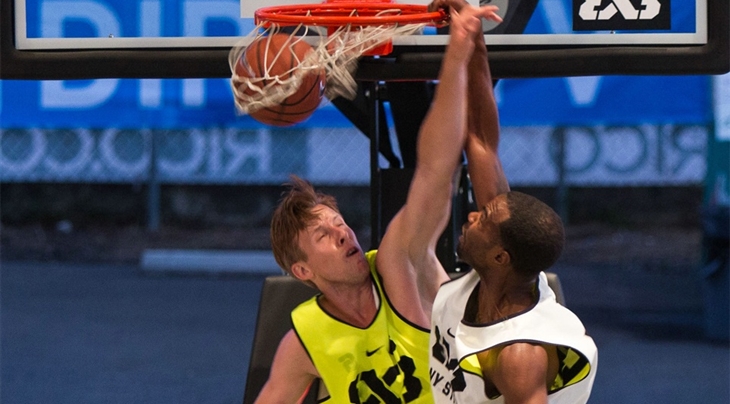 NEW YORK (3x3) - The dynamic Zaire Taylor was unstoppable last year at the 2013 FIBA 3x3 World Tour San Juan Masters leading his NY Staten Island team to victory. Last weekend, he won the Battle of the Boroughs Finale on the legendary playground of Dyckman, New York to stamp his return to the FIBA 3x3 World Tour in Chicago on 15-16 August. We spoke with the man who has more punchlines than Muhammad Ali.

"I definitely want to compete and have a chance to defend our title.

"3x3 basketball has picked up big time here. A lot of big names came to ball last weekend: legendary New York streetball players like Corey 'Homicide' Williams, Aaron 'The Problem' Williams or David 'Super Dave' Seagers. They're all very respected players here and it makes it even more exciting to win in these conditions."

"I remember the looks we got when we first entered the court, with me being the biggest guy. Then on the first game, I dunked on somebody and people started to wake up," said the number three 3x3 player in the US.

"I recall Team Denver (who had won the 2013 3x3 US National Trials) drew a lot of hype but then we locked them down. I dunked on their big man and the game wasn't really that close.

"I won't forget the joy of winning the whole thing."

The voluble Taylor was unavailable to join his team for the FIBA 3x3 World Tour Final in Istanbul last year and had to see his team go win-less in Turkey. He explains it made him hungry to come back and make a statement:

"I remember tweeting that whoever is the new number one 3x3 player in the world never beat me," said Taylor.

"I felt like if me and Jules (team-mate Julius Coles) were with them, we could not have lost. Realistically I won the championship in every tournament - streetball, 5x5 and 3x3 - I have played in a year. I haven't lost anything."

Taylor has big words but an even bigger resume to back it up. Not only did he bring the Worcester Wolves to the British Basketball League (BBL) title this season, he was also named MVP of the season and the Final, scoring 30 points, nine assists, six rebounds and four steals in the ultimate game.

And the man with the SINY (Staten Island New York) tattooed on his back is competitive. A few hours after the interview, Taylor featured in a streetball tournament called Island Tournament, where he dropped 100 points with four seconds left... in the third quarter…

"I want to win everything," said the bearded man.

"A lot of teams come to 3x3 with a very traditional set-up with one point guard, one wing and one big man but the problem is I feel like I can guard anybody. A 6ft 10in (2.08m) player will have a lot more trouble guarding me than I will have guarding him. Post-game and defense is a lot more about footwork than power. If I want to, I will post up the big men as well and I know my whole team has the same attitude. Nobody that size is going to stay with us and I will prove it."

The FIBA 3x3 World Tour not only got one of its brightest stars back. More joined on the same weekend as the number one player in the world Taylor teased on the social media last year, Dusan Domovic Bulut, won the Decathlon B33 World Tour Qualifier in Hungary on Saturday.