3x3's finest come together in Qatar for FIBA 3x3 All Stars 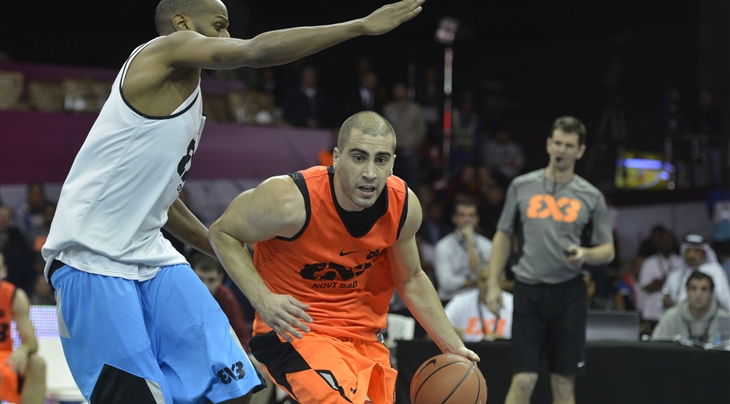 DOHA (FIBA 3x3) - The 3x3 season will conclude on a high note on 12 December in Doha, Qatar with the second edition of the FIBA 3x3 All Stars, a one-day event which brings together the best players in the 3x3 Individual World Ranking from all over the world and offers a grand total of $120,000 USD in prize money.

The six participating teams were drawn in two pools of three based on their ranking with FIBA 3x3 World Tour winners Team Novi Sad seeded number one in Pool A.

The Serbians led by number one 3x3 player in the world, Dusan Domovic Bulut, will look to replicate what Team Brezovica did last season, a World Tour-All Stars double.

Novi Sad enjoyed a near-perfect season, only tainted by a loss in the final of the FIBA 3x3 World Championships (representing Serbia) on 8 June.

The loss came against Qatar, who will have three players from that winning team feature at the All Stars in Pool A. Their captain, the lanky Yaseen Musa is the number one 3x3 player in the host country (12th in the world).

"I have a great deal of respect for Doha," said Bulut, who is also known as "Mister Bullutproof".

"Musa and (speedy team-mate) Boney Watson are very good players. I like to play against them but rivalry or not, my mind is set on winning."

After their triumph at the FIBA 3x3 World Championships, Musa and co had a lukewarm experience losing the final of the FIBA 3x3 World Tour Manila Masters in July but bounced back to win the 3x3 event at the Asian Beach Games in Phuket, Thailand.

"Last year we had no experience (Doha lost in the FIBA 3x3 All Stars semi-final in overtime… against Novi Sad). But now we know the rules, we know the teams very well. We play on our homecourt. Now we're ready," the top scorer at the 1999 FIBA U19 World Championship declared.

The number one 3x3 player in Japan (qualified as top-ranked player in the rest of the world), Tomoya Ochiai aka "Worm" brings a revamped Yokohama team which will still feature the tallest player at the event, Matthew "White Ninja" Kyle (2.11m).

"We organised a well-balanced team with an advantage in speed and height. We understand Novi Sad and Doha are top level teams but will demonstrate that a Japanese team can win," explained the lefty Ochiai.

In Pool B, two rival teams will meet for the second time in two months. 3x3 legend Angel Santana (who qualified as number one 3x3 player in Europe since Bulut made it as FIBA 3x3 World Tour winner) will bring a new-look Bucharest team with a lot of size - an average height of 1.99m makes it the tallest team at the event - and the prospect of going up against Team Saskatoon and Willie Murdaugh, the number one 3x3 player in the Americas does not make him sweat.

"Saskatoon is physically amazing but we will play them European style," predicted Santana, the only player to qualify three times for the FIBA 3x3 World Tour Final.

"After all, they beat us (in the semis of the FIBA 3x3 World Tour Final) but we gave them a good run. We earned their respect."

Saskatoon leader Michael Linklater did not deny it.

"We had a great battle in Sendai and they definitely have our respect," said the Canadian ball-handler.

"When we look back on our season, we only lost one single match, in the title game of the FIBA 3x3 World Tour Final against Novi Sad. We kicked ourselves for playing one terrible game and are excited to get an opportunity to redeem ourselves."

The sixth and last team may be the one playing under the most scrutiny. Kaunas U18 will be spearheaded by Martynas Sajus, a 2.06m big man who happens to be the number one U18 3x3 player in the world. Together with his team (all aged 18), he won a gold medal in 3x3 basketball at the Youth Olympic Games in Nanjing on 26 August 2014. Can a young team compete with the more experienced and physical 3x3 teams like Saskatoon (the eldest team at the event) and Bucharest?

The sharp-shooting Jonas Leksas indicated it would not be the first time.

"We are used to playing against adults in the second and third Lithuanian league (5on5). It doesn't matter if we are playing against men or children, we want to win. We have played so many 3x3 events together for the last 10 years at all levels so we know each other extremely well, we are like family."

The event starts at 15:00 local time (12:00 GMT) on Friday and will also feature the Samsung Shoot-Out Contest, two mind-blowing performances from the most prestigious acrobatic dunkers crew, les "Barjots Dunkers" and the tunes of Filipino band Q-York.

The entire event will be available on www.livebasketball.tv and on the 3x3's official YouTube channel www.youtube.com/3x3planet, with the final scheduled to take place at 19:30 local time (16:30 GMT).