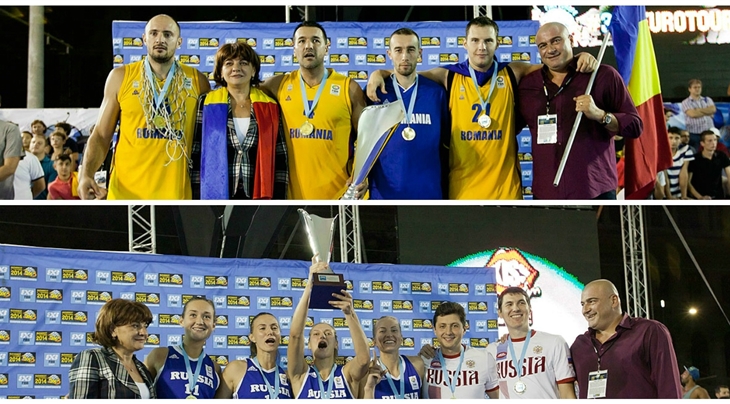 The center court flooded with people right after the final buzzer of the 3x3 European Championships Men's Final as Romania had just written history in conquering the first-ever title in the competition with a 18-16 win over Slovenia.

More than 1,000 fans around the center court and many more outside at the giant TV screen watched as the atmosphere reached its peak in a tremendously intense and close final game.

The teams traded baskets throughout the game, with the lead changing multiple times.

Bogdan Popescu scored a team-high 9 points for Romania, including a decisive put-back in the dying seconds of the game to give the fan favourites the lead.

Vlaicu and Santana count among the most recognizable and experienced 3x3 players, having represented Romania in both FIBA 3x3 World Championships (2012 and 2014) and all three editions of the city-based competition, the FIBA 3x3 World Tour (2012, 2013 and 2014).

Ales Kunc confirmed his superb form in the final, tallying a game-high 11 points in the losing effort.

Lithuania claimed the bronze medal after beating Greece in the third place game.

In the women's competition, Russia claimed the title in convincing fashion, although Slovenia showed they were in the final for a reason.

The Slovenians had the best game of all teams against the dominant Russian side, coming close on good outside shooting and hard-nosed inside game before eventually falling 16-13.

It was a happy ending for a great summer for Russia's women who had struck silver at the 2014 FIBA 3x3 World Championships in Moscow on 5-8 June 2014.

After winning bronze at the 2014 FIBA 3x3 World Championships, Belgium collected the same medal in Bucharest, defeating Netherlands in the third place game.

For further information on the teams' rosters and the full schedule, please click here.