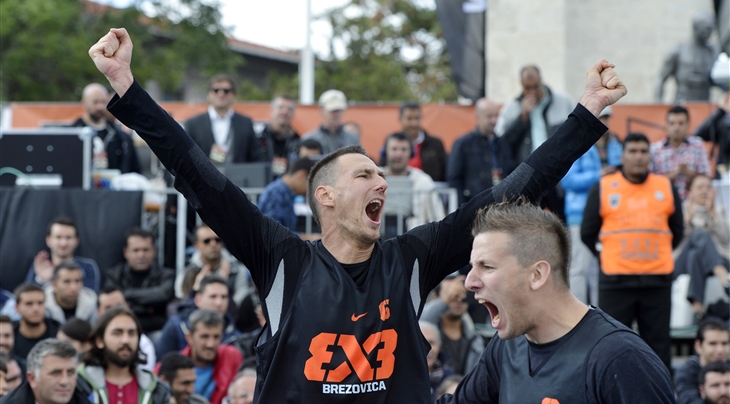 LAUSANNE (3x3) - Team Ljubljana (SLO) may have changed name (they were called Brezovica until last year) but their ambitions have remained the same: to shine at the FIBA 3x3 World Tour, which they won in Istanbul, Turkey on 5 October 2013.

Just like last year, the running champs spearheaded by former number one 3x3 player in the world Blaz 'Birdman' Cresnar had to wait until the last qualifier in Denmark - just five days before the Lausanne Masters - to qualify for the World Tour.

Last year in the heart of Lausanne in front of 30,000 fans, Ljubljana only finished as runners-up in dramatic fashion, in a final for the ages against their arch-rivals from Kranj (SLO). To make things interesting Kranj as well is back in Lausanne, together with several familiar faces.

While Ljubljana will feature as number one seed in Pool A, with returning World Tour participant, Lecco (ITA), Kranj will be the team to beat in Pool B. The same team that won the Lausanne Masters last year and finished fourth at the 2013 FIBA 3x3 World Tour Final is back, with the notable addition of former Slovenian youth 5on5 international Boris Jersin.

Another former number one 3x3 player in the world will compete in Pool B, the multi-talented Simon Finzgar, representing the city of Trbovlje, one of three Slovenian teams at the event.

Two Tunisian teams, together with two German, a Dutch, German and a French team will battle to contest the Balkan domination of the Lausanne Masters last season where two Slovenian, one Serbian and one Croatian teams had made it to the semi-finals.

The pool stage starts at 17:00 CET (15:00 GMT) on Friday 29 August with Ljubljana (SLO) against Marburg (GER) and finish around 22:00 CET (20:00 GMT). Fans will not want to miss the Dunk Contest Qualifier at 20:50 local time (18:50 GMT) since the event will feature a number of good dunkers including Latvian specialist Renars Bulduris.

On top of the Samsung Shoot-Out Contest whose final is at 19:30 CET (17:30 GMT), fans will be looking forward to the final of the Dunk Contest at 21:00 CET (19:00 GMT) featuring a 1.65m tall dunker who can jump over seven-footers (Porter Maberry) and dunking superstar Justin 'Jus Fly' Darlington.

The fan experience will continue all over the pedestrian streets of Lausanne with a mass event featuring six additional courts and over 100 teams, with graffiti demonstrations and break dance contests.

All the action will be livestreamed on 3x3's official YouTube channel.