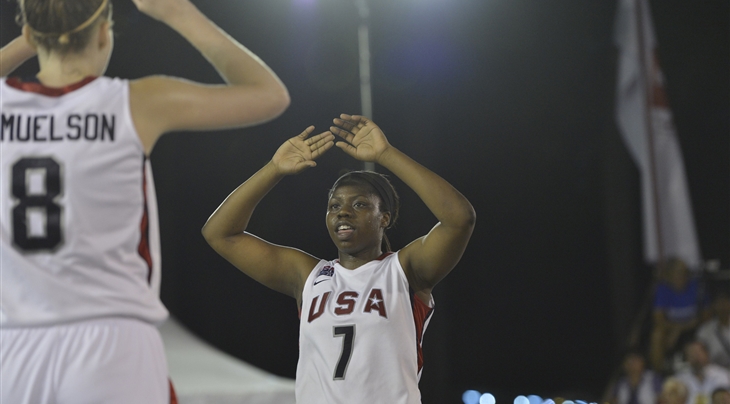 NANJING (3x3) - The pools for the 3x3 men's and women's events at the 2014 Summer Youth Olympic Games taking place from 18-26 August in Nanjing, China were announced today.

Just like at the first-ever Youth Olympic Games in 2010 in Singapore, 3x3 will be the only basketball discipline played at the event.

The 20 men's teams and 20 women's teams were both divided into two pools of 10. The best eight teams from each pool will advance to the knock-out stage, which starts with the Last 16.

The combined 40 teams will represent a total of 30 countries and feature athletes born between 1 January 1996 and 31 December 1997.

You can learn more about the eligibility rules and qualification system on the following seeding guide.

The pools were determined in accordance with the 3x3 Federation Ranking, which is based on FIBA's unique 3x3 Individual World Ranking.

Can the Chinese women repeat their title from four years ago in Singapore, on their home-court in Nanjing?

The pool will also feature Hungary, who managed to secure the number one seed both in the women's and men's categories thanks to the amazing number of youth 3x3 events staged in the country in the last 12 months and the performance of their players.

The team to beat in Pool B will be none other than the back-to-back 3x3 U18 world champions USA, who already announced the participation of two of last year's winners - rising stars Arike Ogunbowale and Katie-Lou Samuelson.

Belgium and Czech Republic, two countries that have claimed their ambitions in 3x3 basketball, reaching the Semi-Finals of the 2014 FIBA 3x3 World Championships in Moscow, Russia earlier this month, will be their main competition in the first stage of the event.

In the men's event, the Chinese hosts will be paired with Lithuania and France in Pool A. Lithuania knocked out the heavy favourites USA on their way to a fourth-place finish at last year's FIBA 3x3 U18 World Championships. France did better, collecting a silver medal in Jakarta.

The pools start on 18 August and end on 24 August. The knock-out phase starts with the Last 16 and culminate with the finals on 26 August.

Eight additional medals will be up for grab in Nanjing with the Dunk Contest for men and the Shoot-Out for women (gold, silver and two bronze medals for the semi-finalists for both events).