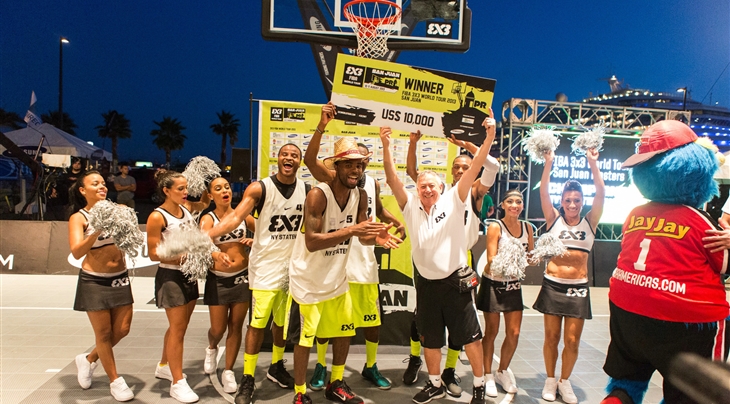 CHICAGO (3x3) - After winning the 2013 FIBA 3x3 World Tour San Juan Masters last year and dominating teams from all boroughs at the World Tour Qualifier staged in New York this year, Team NY Staten has been seeded number one at the 2014 FIBA 3x3 World Tour Chicago Masters, which will take place this coming Friday and Saturday, 15-16 August. While other pools will be stacked with World Tour powerhouses, the will meet two newcomers in Pool A.

Things will look a lot different for NY Staten this year after they came in as a ninth seed last year and upset all the favourites. Because of their first seed this year, the Staten Island natives will avoid Team Philadelphia or Saskatoon, two teams with whom they exchanged wins and losses on the World Tour last season.

The seeding is conducted automatically according to the 3x3 individual world ranking (of the three best players from each team). According to the regulations, the number one seed meets the number eight and number nine seeds in Pool A.

NY Staten will meet Team Louisville, who won a Hoop It Up event in their hometown in June and Mexico UNAM, the youngest team in the event who will make history as the first-ever Mexican team to play at the FIBA 3x3 World Tour.

Team Winnipeg (CAN) secured the number two seed but will headline a competitive Pool B with a revamped San Juan (PUR) squad that kept just one player from the team that won the FIBA 3x3 World Tour in 2012. Team Chicago will no doubt be a force to be reckoned with featuring several local streetball stars and playing on their home ground.

Last but not least, Pool D will be interesting to watch with two former FIBA 3x3 World Tour finalists, Team Saskatoon (CAN) and Denver (USA). After finishing second at the 2013 San Juan Masters (losing in the final against NY Staten), Saskatoon came in sixth in the World Tour Final in Istanbul, Turkey. Following their win at the 2012 New York Masters (beating San Juan), the team from the Colorado finished fifth in the Final in Miami. Both could have hoped for an easier seeding as the third team will be none other than Rio Piedras (PUR), who won the T-Mobile 3x3 Streetball Puerto Rico Challenge this year.