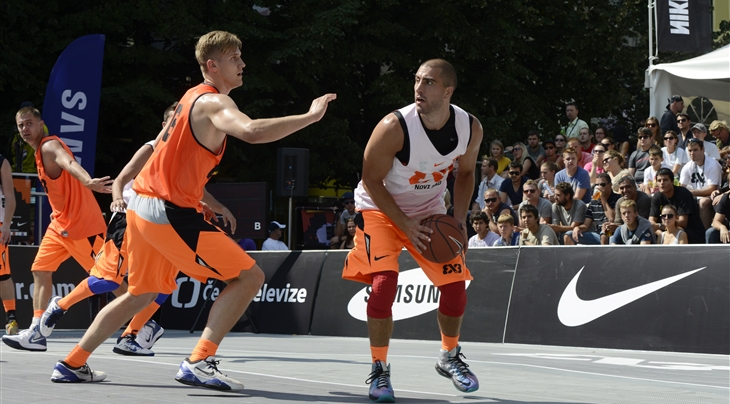 PRAGUE (3x3) - Team Novi Sad (SRB) spearheaded by the number one 3x3 player in the world, Dusan Domovic Bulut aka ‘Mr Bullutproof’ will be looking to confirm their success in Prague last year during the 2014 FIBA 3x3 World Tour Prague Masters on 23-24 August 2014.

They are back in the historic centre of Prague on the same beautiful Wencleslas Square, among the basketball fans and the curious tourists where they prevailed just a year ago. In the Czech capital, Team Novi Sad started a long 3x3 campaign that brought them to the FIBA 3x3 World Tour Final in Istanbul then the FIBA 3x3 All Stars in Doha.

The same Novi Sad team which will be in Prague this weekend represented Serbia at the 2014 FIBA 3x3 World Championships in Moscow on 5-8 June and finished second (behind Qatar) and number one European nation. Bulut, Zdero and Savic are number one, two and three in the 3x3 Individual World Ranking and with the seeding based on this ranking, will naturally be seeded number one in Pool A.

But for those asking who’s playing for second place, people will remember that both St Petersburg (RUS) and Ostrava (CZE) defeated Novi Sad (SRB) in the pool stage last year. The two teams are back this year with a similar roster.

In fact six of the 12 teams come for an encore (Novi Sad, St Petersburg, Ostrava, Leningrad, Bucharest and Kaunas) and the tournament will feature six of the top 15 players in the world.

Three players from Team Bucharest represented Romania at the 2014 FIBA 3x3 World Championships and though they lost against Serbia in the quarter-finals, they pushed them to overtime and had several chances to win.

The four players featured on Team Ostrava represented Czech Republic at the World Championships as well and gained a lot of attention after beating USA and especially Slovenia, who was represented by the exact same players who had won the World Tour last season. They also lost in the quarter-finals, against Qatar, the eventual winners.

The pool stage starts at 16:40 CET (14:40 GMT) on Saturday 23 August with a Serbian derby between Novi Sad and Liman and finish around 21:30 CET (19:30 GMT). Fans will not want to miss the Dunk Contest Qualifier at 20:30 local time (18:30 GMT) since the event will feature a number of good dunkers including Latvian specialist Renars Bulduris.

On top of the Samsung Shoot-Out Contest whose final is at 16:45 CET (14:45 GMT), fans will be looking forward to the final of the Dunk Contest at 18:00 CET (16:00 GMT) featuring Lukas Biedny, who jumped over five people to win the Prague Dunk Contest last year and dunking superstar Justin ‘Jus Fly’ Darlington.

All the action will be livestreamed on 3x3’s official YouTube channel.