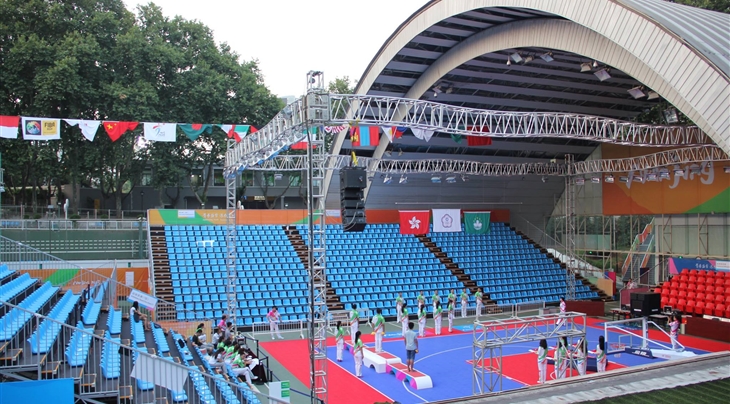 3x3 is the only basketball disciplined featured in the second Summer Youth Olympic Games in Nanjing, China. The action starts today Monday 18 August for the future stars of 3x3.

Each team will play between 1 and 2 games per day from 18 to 24 August, with the only exception being Thursday 21 August where the first 3x3 medals will be awarded during the two individual competitions, the Women’s Shoot-out Contest and the Men’s Dunk Contest.

The games can be followed on TV with the extensive list of international broadcasters available on www.olympic.tv.

Live and on-demand coverage of the action can also be watched through the IOC’s global digital platforms: www.olympic.tv, www.olympic.org and www.youtube.com/olympics. For anyone in China, tune in to http://sports.cntv.cn/special/nanjing2014/index.shtml, which will be broadcasting the competition extensively.

Last but not least, you can follow the games with the Olympic TV app on your mobile device.

The Women’s tournament is stocked with talent, with the top six U18 women in the 3x3 Individual World Ranking competing in Nanjing, starting with the current number one, Estonia’s Kadri-Ann Lass.

The US team will feature two of the four players (Arike Ogunbowale and Katie-Lou Samuelson) who struck gold at the FIBA 3x3 U18 World Championships in Jakarta, Indonesia on 26-29 September 2013.

They will still have to solve a 1.92m-tall problem named Dilixiati Dilana, who will star for the Chinese team, the winners of the 3x3 event at the 2010 Youth Olympic Games, playing at home in front of their numerous fans.

The men’s tournament will bring together some of the best athletes to have ever played 3x3, including the number one U18 player in the 3x3 Individual World Ranking, Justas Vazalis from Lithuania.

Argentina will look to keep its hegemony on 3x3 youth basketball following their success at the 2013 FIBA 3x3 U18 World Championships with a new-look team spearheaded by the dynamic Jose Vildoza.

The 18 year-old will headline a list of players who have already shined in youth 5on5 basketball such as Russia’s Vladislav Staratelev and New Zealand’s Izayah Le’afa.

Follow the action on FIBA.com, including a daily recap after the games and more features.