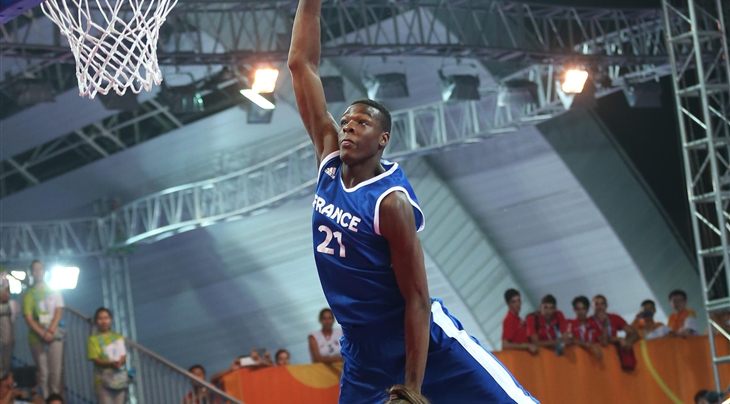 NANJING (3x3) - France's Karim Mouliom defied gravity at the Dunk Contest of the 2014 Youth Olympic Games (YOG), in Nanjing, China on 21 August 2014. His acrobatics which included jumping over three players convinced the jury to award him gold, ahead of Ziga Lah (Slovenia), who won silver and local favourite Lei Fu (China) who collected bronze.

The 1,93m showed immense athletic abilities as he jumped over team-mate Teddy Cheremond and then flew over three members of the Hungarian women's national team, drawing a perfect 30 from a dunk jury which included former Olympian and YOG Athlete Role Model Jorge Garbajosa.

"I didn't think I could win this at all. Everything was all so spontaneous. I didn't talk to the Hungarian girls before attempting my dunk for instance. I just wanted to give the public a show!"

The crowd loved it and Mouliom embarked on a long series of selfies with Chinese fans after his success. The local supporters followed the contest with a special interest as their countryman Lei Fu clinched an unexpected bronze medal.

Just half an hour after Slovenia had won a first silver medal courtesy of Ela Micunovic at the Shoot-out Contest, Ziga Lah struck silver too, after giving Mouliom a pretty good sweat.

"When the Slovenian guy started trying a dunk from behind the back, I was so scared," the 18 year-old French confessed.

Though Lah, who suffered an ankle injury earlier this week, failed to convert any of his last three attempts, he did make some of the most memorable dunks of the event, including an amazing jam between the legs.

All players will compete for another set of medals with their national team at the 3x3 men's event, whose final is on Tuesday 26 August.