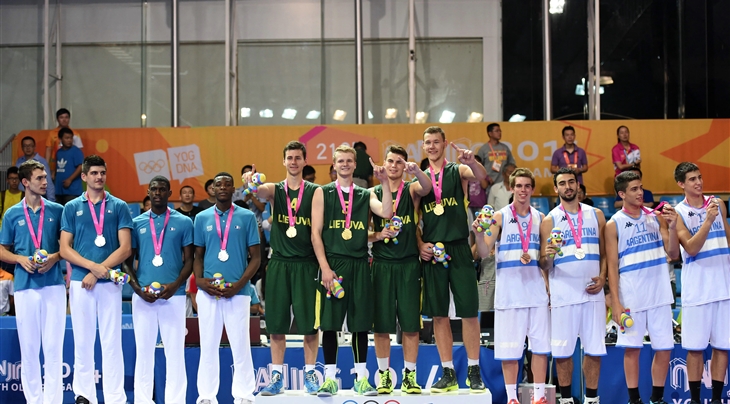 NANJING (3x3) - The Lithuanian Men’s 3x3 National Team stunned France in overtime on an improbable long distance shot in the final of the 3x3 event of the 2014 Youth Olympic Games, in Nanjing, China on 26 August 2014. This marked Lithuania’s first-ever success in a 3x3 international tournament.

The team featuring Jonas Leksas, Martynas Sajus, number one U18 3x3 player in the world Justas Vazalis and Kristupas Zemaitis was unstoppable at the event, winning all 13 games but has to earn their gold medal in the final, which went to overtime after the final’s top scorer, France’s Lucas Dussoulier tied the game at 16 with just a few seconds to go.

After both teams blew up chances to win the game, the sharpshooting Zemaitis launched an off-balance desperation shot with his feet close to the end line of the 3x3 court that hit the bottom of the net.

Zemaitis scored 5pts in the final, while big man Sajus had 6 and Vazalis added 7. All four members of the team – including Leksas who did not score in the final – represented Lithuania together already last season at the 2013 FIBA 3x3 U18 World Championships in Jakarta, Indonesia on 26-29 September, where they ended fourth.

It was an unexpected run for France, who struggled in the pool phase, finishing just sixth, who will add this silver medal to Karim Mouliom’s gold at the Dunk Contest, which was staged on 21 August 2014.

After winning the FIBA 3x3 U18 World Championships last year, Argentina collected bronze this time after a hard-fought win against Russia thanks to the talented José Vildoza (9pts).

Go to www.olympic.tv and search '3x3' to rewatch the final and all Lithuania games.