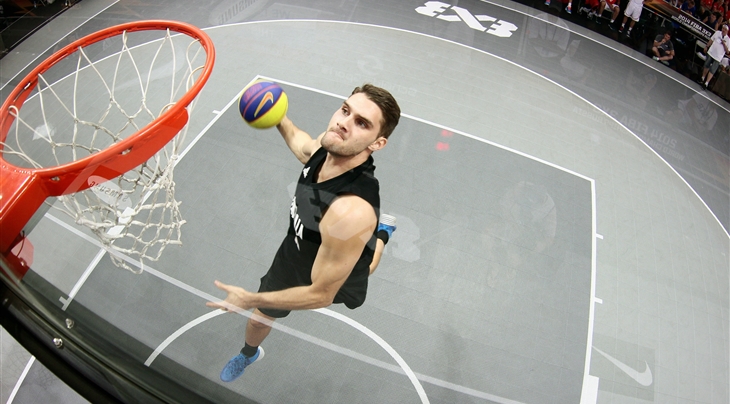 After playing 3x3 all over New Zealand and flying 33 hours to represent his country in Russia at the 2014 FIBA 3x3 World Championships, Team Auckland’s big leaper Patrich Bolstad took his passport to the Philippines for the FIBA 3x3 World Tour Manila Masters... with his eyes already set on the Tokyo Final.

Just one month after leading New Zealand to 12th place at the FIBA 3x3 World Championships, the 24 year-old told he was ready for more 3x3 adventures:

"I’m really looking forward to Manila. I love 3x3. Ever since New Zealand won the FIBA U18 3x3 World Championships (back in 2011), 3x3 has been growing a lot here. We have events all over the country, the game is even played in the schools. I have been training a lot and am focused on boosting my 3x3 game."

In fact, thanks to several wins at the 3x3 Burger King New Zealand National Tour and the 'There’s a Better Way' Quest, Bolstad climbed up the ranking to become the number-one-ranked 3x3 player in New Zealand.

His Auckland team was meant to feature a second FIBA 3x3 World Championships participant (Rory Fannon) and the first athlete to play all three FIBA 3x3 World Tour editions (Duane Bailey) but both had to withdraw because of injury.

"We had late people joining the team but we've organised sessions to gel and play together", Bolstad explained.

"They can fit in straight away. We're a young team, a hustle team. Ana (Anamata Paura Haku) is a pretty good shooter with good handles. Lydon (Aoake) can knock down the mid-range shot and John (Harrison) is a really fast player."

In reality, Harrison is not only quick on the playground. He often takes his talents to the club as a DJ or to the studio where he recorded a few tracks already under the name 'Seymore' including the excellent 'Stones'.

If anyone is "throwing stones in [his] dreams" in Manila, Harrison can count on Bolstad to be his rim protector.

"My style of play is physical", the Tall Black explained.

"I always give a lot of effort and I do take a few elbows. That's how I got a chipped tooth in Moscow."

"I learned a lot there and I told the guys that with the 12-second shot-clock they need to be extremely fit and clear the ball quickly. The best teams though are not just great athletes but also play very smart, exploiting mismatches and knowing exactly how many seconds are left on the shot-clock at all time."

Despite the presence of two freshly-crowned FIBA 3x3 World Champions in Team Doha (QAT), the 3x3 rising star has set the bar very high for the event and warned he would do everything to continue playing 3x3 this season.

"Obviously we're going to the Philippines with no other objective but to win. Of course we are looking to have a good time but my personal goal is to be in Tokyo for the (FIBA 3x3) World Tour Final."

The road to Tokyo starts on Saturday 19 July in Pool C with a strong Manila North squad lead by 2013 PBA (top Filipino 5on5 league) Rookie of the Year Calvin 'The Beast' Abueva and Team Xinzhuang from Chinese Taipei.