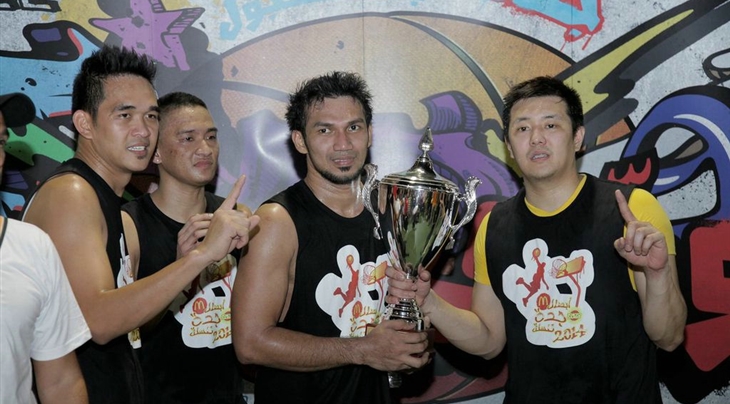 And to be fair, 2013 FIBA 3x3 World Tour participant Pierre Njeim and his team stood in their way as soon as the semi-finals.

"They were smart and knew how to capitalise on the opponents' weak spot", the Lebanese sharpshooter confessed.

"They could all post up and shoot from long range so you can call them a pretty all-around team. They shared the ball and were in great shape which helped them outhustle my team."

Another challenge was around the corner in the final as Team 'Thunderous' brought the game to overtime.

"Things of course got hard in the final (for Team 'Friendster') but they executed well. They were steady and had mental toughness. When they scored that final lay-up in overtime, the crowd absolutely erupted."

The 500 spectators - including Mr Mohammed Khamees from the Saudi Arabia Basketball Federation - were rewarded with a thrilling finale and activities aplenty with a dunk contest, graphers, dancers and on the mic, famous radio host and hip-hop activist Hassan Dennaoui aka "Big Hass".

It is the start of a new adventure for Jeric Basa - a King Fahad Hospital employee - who rejoiced at the idea of making his FIBA 3x3 World Tour debut.

"I am very excited, my family is excited and my friends are excited and it will be the first time I get to go to Beijing!"

Team 'Friendster' - who have yet to decide which city they will represent at the World Tour - will feature in the Beijing Masters on 2-3 August.

The dates and locations of the 2014 FIBA 3x3 World Tour will be officially announced next week.