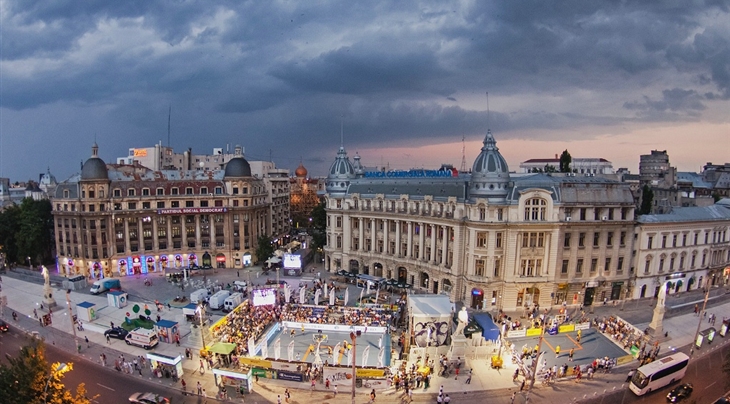 BUCHAREST (3x3) - History will be written on Friday when the inaugural edition of the 3x3 European Championships tips off in Bucharest.

The event is co-organised by the Romanian Basketball Federation and Sport Arena Streetball, under the aegis of FIBA Europe, and will take place from 5-7 September in University Square in the centre of the Romanian capital, proclaimed by Sports Illustrated as "the unlikely mecca of 3x3".

Following the conclusion of three qualifying tournaments across Europe, 16 men's and 16 women's teams, split into groups of four, will compete for the title of European champion.

The format of the competition will see every team play the other three teams in their group, with the top two teams from each group advancing to the quarter-finals.

The 3x3 European Championships are considered one of the most competitive 3x3 tournaments of 2014, with nine players featuring in the top ten of the FIBA 3x3 individual world ranking, including the world-number-one Dusan Domovic-Bulut from Serbia.

The Serbians, winners of the inaugural 3x3 World Championships in 2012 and current vice world champions, are amongst the favourites in the men's competition.

Slovenia enter the competition with an equally high reputation featuring the four players who won the 2013 FIBA 3x3 World Tour final in Istanbul, under the name Team Brezovica.

The women's field is no less impressive, as it includes the silver and bronze medallists of this year's 3x3 World Championships, Russia and Belgium.

The weekend will be rounded out by various entertainment on and off the court, including an international dunk contest with four of Europe's best dunkers and 3x3 EuroTour dunk contest winners, Rafał 'Lipek' Lipiński, Dmitry 'Smoove' Krivenko, Kristaps Dārgais and Łukasz Biedny.

Basketball fans around the world will have the chance to follow the event on TV and online, with all games from the centre court being streamed live and for free on 3x3's official YouTube channel.

"We are excited to hold the first ever 3x3 European Championships in Bucharest, a city which has established itself as the unofficial capital of 3x3 basketball," commented FIBA Europe Secretary General Kamil Novak.

"3x3 basketball has made huge strides in the past years, the 3x3 EuroTour being a prime example for the popularity of the sport. The 3x3 European Championships are the next logical step in its development.

"In the Romanian Basketball Federation and Sport Arena Streetball we are happy to have two experienced partners on board, and I am certain that the 3x3 European Championships will be a great success, taking the sport to even higher levels."

The pools of the 3x3 European Championships are as follows:

For further information on the teams' rosters and the full schedule, please click here.