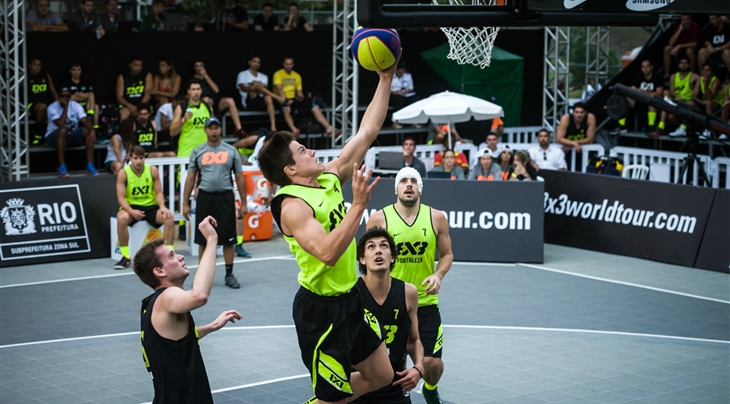 RIO DE JANEIRO (3x3) – Last year at the FIBA 3x3 World Tour Rio de Janeiro Masters Brazilian teams had struggled to shine with only one of them reaching the semi-finals and none of them featuring in the final. This season, with Fortaleza, Santos, Sao Paulo DC and Sao Paulo dominating Day 1, it will be a 100% Brazilian semi-final with two of these teams looking to fly to Tokyo/Sendai for the FIBA 3x3 World Tour Final on 11-12 October.

Last month Team La Guaira (VEN) had beaten Team Caracas, the winners of last year’s edition in the final of the 3x3 Venezuelan Tour but in Rio, right next to the beach, among the palm trees and with the Sugarloaf Mountain on the horizon they could not stop the Brazilian fury. And neither could the 3 top Argentinian teams and the best squads in Uruguay and Ecuador.

The fancy-dribbling Marcellus Sarmento was on fire on Saturday scoring in double digits in each one of his games and topping all scorers with 36 points. The 26 year-old led Team Santos – who only features three players – to a clean record on Day 1, stopping all three games before the 10 minute-limit (21-12, 21-12, 21-13).

The runner-up in the scoring charts was none other than the speedy Davi Rossetto who scored 33 points, including 15 (the best individual performance of the day) in the quarter-finals against Neuquen (ARG). The 22 year-old scored a number of big shots on Saturday including a memorable two-pointer off the dribble which sent the pool game versus Sao Paulo DC to overtime. His young Fortaleza team also had a perfect 3-0 record on Day 1.

The third team who has yet to lose a ball game at the Rio Masters is Sao Paulo, the most experienced team of the tournament, who – like Santos – decided all its games before the 10-minute limit, never conceding more than 10 points. The pin-sized Rodrigo Del’Arco (1,74m) was the catalyst in offense with 24 points in 3 games but Sao Paulo found a lot of success feeding the big men under the basket with the other three players all over 100 kilos.

Sao Paulo DC was the number one seed and played as such though they lost a crushing overtime loss against Fortaleza in the pool stage. Guilherme Afonso showed a great touch from behind the arc and scored 21 points on Day 1. Fejao Pereira and Juninho Mariano Jr weren’t shy from long range either and number one 3x3 player in Brazil Gustavo Bracco was towering the middle pumping his fist after each block and each basket.

The only sparkle for the international teams came when Argentinian Rodolfo Di Biase from Team Concordia won the Oi Galera Dunk Contest Qualifier with a pair of spinning dunks, which earned him a trip to the Final at 10:55 local time (13:55 GMT/15:55 CET) against Jordan Burger and the two-time FIBA 3x3 World Tour dunk champion Rafal ‘Lipek’ Lipinski, out of Poland.