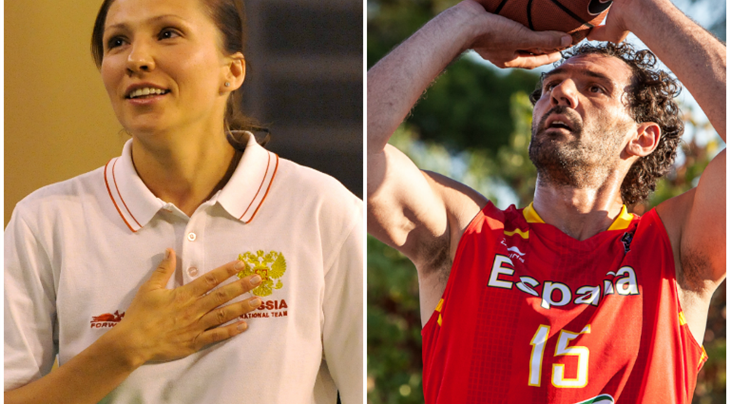 Selected by FIBA, the two former basketball aces are among the 37 Athlete Role Models (ARMs) which the International Olympic Committee (IOC) named on Monday. In Nanjing, they will play a key role in supporting, mentoring and offering advice to the 3,800 young athletes who will be participating in the Games, especially the 160 boys and girls playing 3x3. The young discipline will once again be the only basketball event at the YOG after its successful introduction in Singapore in 2010.

"This is a great honour, probably the highlight of my involvement in basketball," the 2004 Athens Olympics bronze medallist told FIBA.com.

"From the day I retired as a player, I have dedicated my life to the three loves of my life: my family, my club and youth basketball.

"Together with my late husband, Shabtai von Kalmanovic, we built a youth programme at Sparta&K which has already produced almost half of our current senior roster.

"At the same time, I have had the honour to serve as the head coach of various Russian national youth teams at U16, U17 and U18 level."

The ARMs will be accessible to the athletes both in the Youth Olympic Village and during a series of educational activities and workshops that will focus on areas such as skills development, how to lead healthy lifestyles, environment and social responsibility and Olympism.

The main goal behind making the ARMs as accessible as possible is so they can share their experiences and inspire the young athletes to be the best they can be both on and off the field of play.

2008 Beijing Olympics silver medallist Garbajosa confessed to FIBA.com that he wished the YOG had existed as a teenager playing basketball in Spain: "I would dream of the existence of the YOG, because I began to play really young in Vitoria when I was 18. The young athletes must know how fortunate they are to have it."

"Playing in the Olympic Games is one of the highest goals that an athlete can reach and no doubt the Beijing Games and the Olympic final against Team USA will be forever in my mind.

"I feel very proud about this recognition. I never thought I could achieve that when I began my career. I’m really involved and I will give my best.

Asked if he had had role models himself and what they taught him, the 2006 FIBA World Champion answered:

“Personally I didn’t really have any during my childhood. I was self-taught, but if I had to mark a turning point in my career, I would say when I met Marcelo Nicola. He taught me so many things and made me give my best. Pau Gasol helped me in the tough moments and always led by example. Chris Bosh showed me that an NBA star can be humble.

3x3 could hardly find a most fitting role model as Garbajosa took part just three months following his retirement in the first-ever FIBA 3x3 World Championships in Athens, Greece on 23-26 August 2012 and says he has not stopped playing since then:

"3x3 will have a decisive role in the future of basketball. It is a revolution that will increase the number of basketball fans around the world and to have a 3x3 tournament at the Youth Olympic Games means that the objective to have this discipline in the Summer Olympic Games is getting closer. I'm a great fan of 3x3 and I must confess I have been hooked for the last few years. Nowadays I take part every week in a 3x3 corporate league with FEB challenging various companies all around Spain.