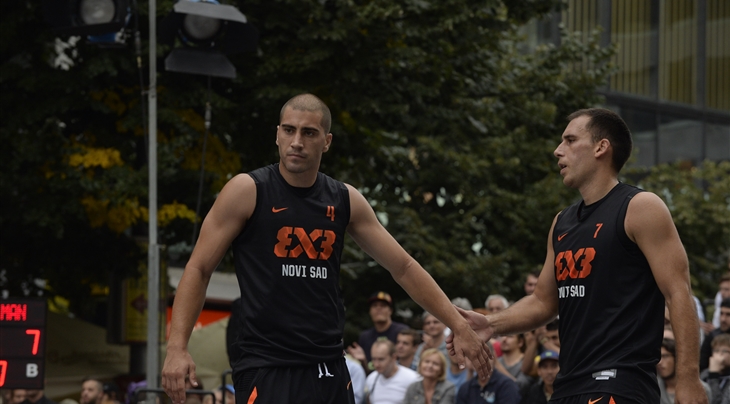 TOKYO/SENDAI (3x3) - The top-seeded Team Novi Sad (SRB) inherited two dangerous teams from the Americas, with Denver (USA) and Santos (BRA) in Pool A of the 2014 FIBA 3x3 World Tour Final, which will be held in Sendai on 11-12 October.

With the reigning champions - Team Ljubljana (SLO) - already knocked out at the Lausanne Masters, last year's runners-up Team Novi Sad look like the heavy favourites in Japan. After all, they dominated the Prague Masters and feature the number one 3x3 player in the world in the individual world ranking, Dusan Domovic Bulut.

However they will have to deal with two serious underdogs in Santos and Denver, who both finished second at the Rio de Janeiro and Chicago Masters respectively. It will not be a first time at the FIBA 3x3 World Tour Final for Denver, who finished fifth in the first edition in Miami, USA in 2012.

The seeding is conducted automatically according to the 3x3 individual world ranking (of the three best players from each team). As per the regulations, the number one seed meets the number eight and number nine seeds in Pool A.

The historic Bucharest (ROU) team - the only squad to qualify for the FIBA 3x3 World Tour Final in all three editions - who reached the quarter-finals in Istanbul last year will face two Masters winners in Pool B: Sao Paulo (BRA) and Manila West (PHI), who won the Rio de Janeiro and Manila Masters respectively.

Pool C will feature Kranj (SLO), who is also back from last year's Final when they beat Bucharest in the quarter-finals and lost in thrilling fashion against Novi Sad in the semi-finals. The Lausanne Masters finalists are seeded in what could be known as 'the pool of death' with Doha (QAT) who owns several players who won the FIBA 3x3 World Championships for Qatar in Moscow, Russia on 5-8 June 2014. Last but not least, Wukesong (CHN) won the Beijing Masters earlier this year and is led by Chris Reaves, the top scorer at the FIBA 3x3 World Tour so far (51 points).

There is one team back from last year's final in each pool as the former quarter-finalist from Saskatoon (CAN) highlight Pool D. The Chicago Masters winners will have to cope with a challenging pool with Trbovlje (SLO), who won the Lausanne Masters this season and made it to the first-ever FIBA 3x3 World Tour Final in 2012 as well (finishing fourth). The local favourites from Kobe (JPN) complete the pool.

Pool games will start at 12:20 local time (GMT+9) on Saturday, live on 3x3's official YouTube channel. The top-two placed teams from each pool  advance to a standard knock-out round which starts at the quarter-finals stage, from 12:45 (GMT+9) on Sunday.

All games will also be livestreamed on FIBA 3x3’s official YouTube channel.