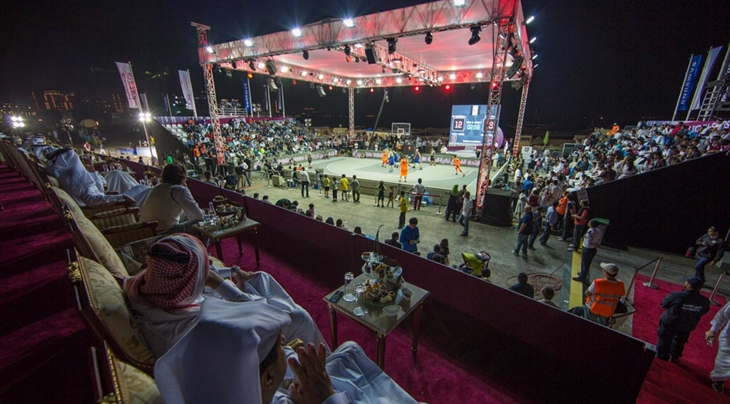 1. 3x3 is all about bringing basketball to the people and play in high-traffic locations against a backdrop of the most iconic cityscapes on the planet. Watching the FIBA 3x3 All Stars will feel like watching Discovery Channel with Katara Beach and the Doha skyline on the horizon and just metres away from the grandiose Katara Roman amphitheatre, host of an open-air opera on Friday night.

2. 3x3 is more than a basketball event, it's a genuine urban culture festival and we brought our favourite Filipino band Q-York to pump up the crowd, with DJ Flavee on the wheels and MC Knowa Lazarus on the microphone. Expect the fans to go wild.

3. Speaking of fans, all six participating teams visited local schools on Thursday to speak about 3x3 and give away basketballs. When you watch the livestream, you will find out who won the battle of the fans, meaning who converted the most kids and families to support them at the event.

4. It's one thing to be a good shooter in a gym, but an altogether different one to still make your shots outdoors. Novi Sad's Dejan Majstorovic made 9 out of 10 shots from behind the arc in the first round of the Samsung Shoot-Out at the FIBA 3x3 World Tour Final. Can he win the QBF Shoot-Out in Doha?

5. Novi Sad and Doha may be the two favourites of this event and they will meet as soon as the pool stage at the FIBA 3x3 All Stars. Led by Dusan Domovic Bulut - the number one 3x3 player in the world - Novi Sad just won the FIBA 3x3 World Tour in Japan and beat Doha at the All Stars in overtime last year but a near-identical Doha team representing Qatar beat the same Novi Sad squad representing Serbia in the final of the FIBA 3x3 World Championships in Moscow on 8 June 2014. Novi Sad against Doha - Part 3 could not be more exciting.

6.Tomoya Ochiai is the number one 3x3 player in Japan. He rebounds like his idol Dennis Rodman, does a little bit of acting and a little bit of modelling. He is as fast on the court as he is on Instagram but can he lead Team Yokohama into the knock-out stage after going winless at last year's event?

8. Another rivalry at the All Stars? Bucharest and Saskatoon will meet in Pool B, just two months after the latter beat the Romanian team in the dying seconds of the semis of the FIBA 3x3 World Tour Final. 3x3 legend Angel Santana brought three new team-mates for the occasion. Enough to beat the physical Canadian team?

9. They might need a trampoline to dunk higher than 'Lipek' but another reason to follow the FIBA 3x3 All Stars is to see the two performances from les 'Barjots Dunkers', a crew of acrobatic dunkers who have risen to fame with their mind-blowing leaps and LED shows.

10. With their team Kaunas U18 (made of four 18-year-olds), they won a gold medal in 3x3 basketball at the Youth Olympic Games, representing Lithuania. By far the youngest team at the event, can Martynas Sajus (number one U18 3x3 player in the world) and his team-mates outspeed the most experienced teams and win the clash of the generations?