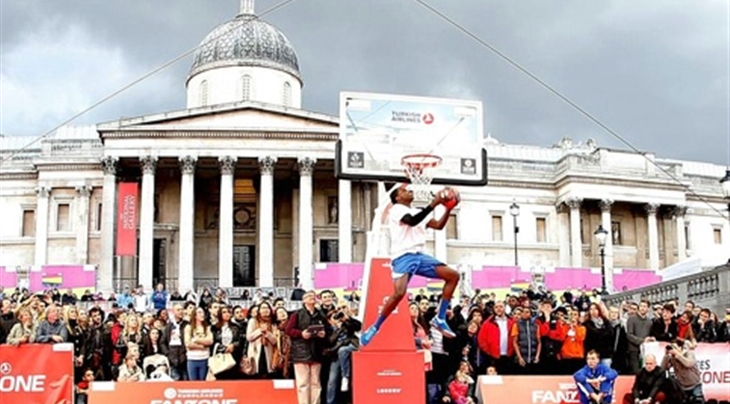 LONDON (3x3) - British 3x3 basketball received an enormous boost in exposure as the U18 Proj3kt 3on3 took centre stage at the Euroleague Final Four Fan Zone at Trafalgar Square in the heart of London last weekend.

In the end, Newcastle knocked off the London Lions 27-18, giving Eddie Matthew, Danny Horta, Andrew Green and Alan Slasor the title and the trophy.

"It's a great opportunity and it's been fantastic. It keeps basketball and the project in the public eye. It couldn't have been better timing," said Gary Aytas, Chief Operation Officer of the BBL Foundation, which organised the event along with Euroleague Basketball's social corporate responsibility group One Team to promote basketball as a tool to integrate communities in the UK.

Great Britain men's and women's national team captains, Drew Sullivan and Julie Page, were on hand to help promote basketball in the country and hand the trophies to the Eagles.

"The event itself is incredible. Saturday afternoon, Trafalgar Square, in the centre of London, a lot of people passing by and it's going to make them ask the question 'what is this and what is going on?'" said tournament coordinator Joe Pinchin, who also works with the Leicester Riders.

"They're going to find something out about basketball which is exactly what we need for Britain and the general public to have some more awareness of how great this sport really is."

The Proj3kt 3on3 programme was created to re-engage teenagers who potentially had fallen out of sports for whatever reason and also to try and engage areas with poverty and higher crime.

The project was funded by Sport England as a six-month pilot with five BBL clubs. In the end, it got more than 1,500 participants - most of whom hadn't been playing sports at the time.

The project culminated in the national finals in Glasgow in early April, with Newcastle taking the crown after an undefeated run. They beat Leicester in the championship game.

"From a participation point of view, I don't think you can get a better thing than 3x3," said Aytas.

"It's very easy for kids to pick up. You just need one hoop. It's all about participation and that's what we want to do after London 2012."

Aytas is hoping to get the programme approved again but include all of the BBL clubs next season.