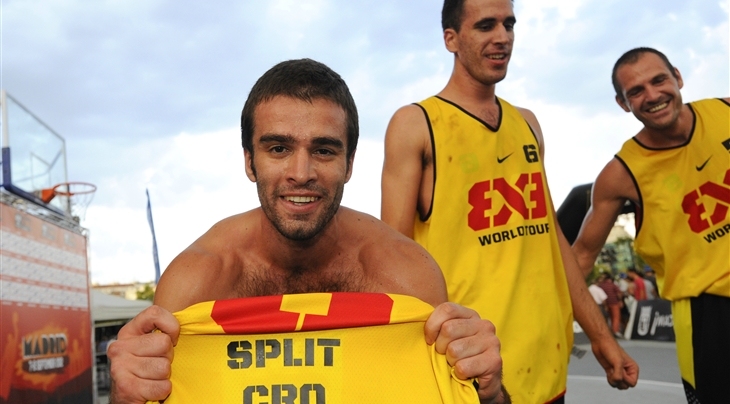 SPLIT (3x3) - Team Split's diminutive point guard Bozidar Vrdoljak has talked about the 'honour’ of becoming the new number one 3x3 player in the world.

It further established the small rivalry between the Slovenian and Croatian teams who crossed swords twice at the FIBA 3x3 World Tour last season, with Team Split prevailing both at the Madrid Masters final on 8 September and at the Miami Final semi-final on 23 September.

"Slovenia has had great teams for years," Vrdoljak explained, "especially Simon's who is definitely one of the best streetball players in the world and have great results."

The two teams might be meeting again today and tomorrow at the Moscow Open, a FIBA 3x3 World Tour qualifier for the Prague Masters on 24-25 August.

"In Moscow the level will be strong, no doubt about it," he conceded.

If Team Ljubljana takes its revenge over Team Split and go far in the tournament, Finzgar and company could retake their crown as soon as Monday.

In the meantime the Split native expects to enjoy his new status.

"Although I don't consider myself the best among all these great players, not even on my team. Every credit goes to my team-mates. We have a great chemistry."

Even if the Croatian lets the accolades go to his head, he can always count on his family and friends, who commented the news with a lot of humour.

"My family's reaction was like 'ok,can you fix the roof now?'" he joked. "And friends were like 'awesome, you'll have more money than (former tennis ace and Croatian icon) Goran Ivanisevic.'"