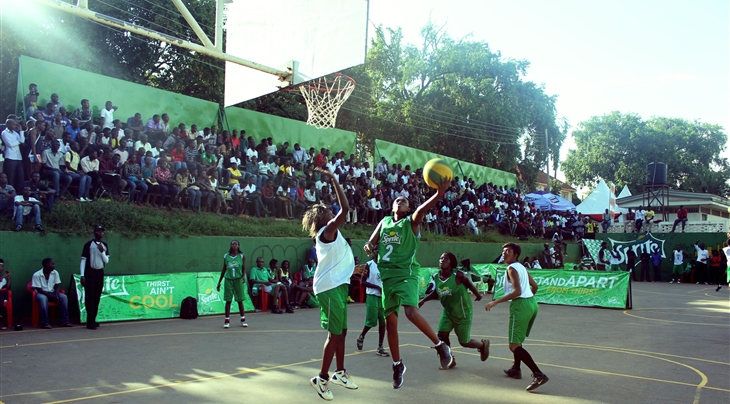 Not even "The Fantastic Four" from KIU could stop Winnie Anyango's 3x3 team in the final of the women's tournament. The law student from the University of Makerere - the largest campus in the country - did not have to use superpowers, just "law and order".

"Our team work made the difference in that game. We knew our role. It was cut-throat competition (6-5 win) but we took the lead after a while and never looked back."

The 23-year-old has her share of experience playing for the (5x5) Uganda women's national team but relished the opportunity to prevail on her home ground.

"It was an amazing experience," the team captain confessed.

"Most of our students came by and we got a little support. The crowd went wild after we won. It was a lot of fun!"

"We had to play against the crowd but it's OK, I like to show people what I can do."

"Defense made the difference in the final. While the other team paid too much attention about how they look, it was all about the team for us," said the 1.80m dragster also known as 'Unbreakable'.

It was the end of an impressive tour which included 8 stages and a final and featured no less than 148 teams.

Hamza Nyambogo Mnemo, the technical director of Pamoja Afriq, an organisation promoting youth development and empowerment in the local communities, tells the idea of the project came last year as he travelled to Kragujevac, Serbia for the first World University 3x3 Championship.

"Following our observatory role (there)," he said. "We proposed to the National University Sports Federation to organise a tour in Universities in Uganda so as to get the response and test our ability to organise a FIBA-endorsed 3x3 tour and ultimately build a product in Universities that will encourage the growth of the game in Uganda."

"Uganda is still developing with regards to basketball and there are not too many organized activities around the game. It is because of this that 3x3 has been an instant hit for both players and fans in Uganda."

With this tour, Uganda collected enough points in the FIBA 3x3 Federation Ranking for Women to qualify for the 2014 FIBA 3x3 World Championships in Moscow, Russia.

It could be just six months before you hear again from Winnie Anyango's silky-smooth jump-shot.